Short Film: A Letter to Congress 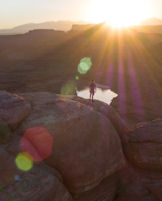 Films on hiking with reticent kids, catching magnificent raptors, mountaineering with “badass” women in Nepal and crazy skiing in the ‘hood represent some of the short film subjects presented at the 2018 Willamette Riverkeeper Wild and Scenic Film Fest. Each year, the WR hosts a sold-out fundraiser to help continue its environmental work on the Willamette River, a watercourse that runs 187 miles through the Willamette Valley, one of the most fertile and productive river valleys in the world.

Williams greeted patrons at the door and his staff helped everyone fill out raffle tickets for things as grand as a canoe and as useful as an REI-donated backpack.

Kate Ross Kuthe, energized and grounded WR Outreach and Education Coordinator, was the MC and festival manager. “How many have been on a Willamette River trip with us?” she asked.

Hands went up! From Paddle Oregon, an annual August five-day trip down the WR to day-long volunteer work-trips to keep the river clean, the WR is the steward of a mighty watercourse that helps maintain the health of the river valley. James Tiefenthaler, WR Board President who has one canoe and three kayaks himself, fielded a raffle table. For years, Tiefenthaler has joined in on several of the activities the WR puts on each week throughout the year.

A gorgeous short film epitomizing the goals of the WR was “A Letter to Congress.” Narrated using a letter written by Wallace Earle Stegner, Pulitzer Prize, and National Book Award Winner in the 1970s, the 3:15-long film, winner of the 2018 Best Short Film in the Wild and Scenic Film Festival, presents the case for the continued, careful stewardship of America’s lands.

Beginning with the competitive sound of croaking frogs marking their territory and attracting mates, war-like thunder, hard-tapping rain, and the gushing of the river, Chris Newman’s magnificently sensory scenes impress upon us Stegner’s words that in “the brave new world of a completely man-controlled environment … we need wilderness preserved, as much of it and as many kinds.”


Hipcamp – A Letter to Congress from Christopher Newman on Vimeo.