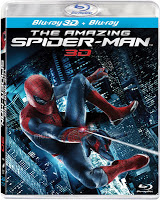 At a press conference yesterday, director Marc Webb and visual effects supervisors Jerome Chen, David Schaub and Rob Engle answered questions about the Blu-ray/DVD release for “The Amazing Spider-Man” and It’s Just Movies was there to cover it.

First off, Webb did address the Jamie Foxx rumor, which you can read more about HERE and he also responded to various inquiries ranging from the film’s format to the successful viral campaign.

With the astonishing advancements in visual effects, and directors like James Cameron and Peter Jackson taking full advantage of this by shooting at higher frame rate, I asked Webb if he would consider filming the “Amazing Spider-man” sequel at 48 frames per second. He expressed no interest in doing so, however he did commend his comrades for taking that step.

I think it’s really exciting that James Cameron and Peter Jackson are experimenting. They’re pushing things forward and I think it’s awesome. We should encourage it.

Shortly thereafter, the topic of film format came up and Webb seemed enthusiastic about the prospect of shooting a sequence in IMAX.

There’s a real feeling in the IMAX environment that was really great. Maybe we’ll do cuts that are specific for IMAX in the future. There was something about that environment that is unique and very exciting.

His moist poignant remark, however, was about Peter Parker and the relevancy of his relationship between the Lizard in “The Amazing Spider-Man” and future villains.

What makes villains interesting to me is what they bring out in Peter. What challenges they provide. What’s great about Marvel and other comics is that often there’s a pre-existing relationship. Not only just the physical obstacles it provides the protagonist, the emotional ones as well. That’s the fun thing to play with.

Webb also expressed gratitude toward the Spider-Man fanbase when an inquiry was made about Sony’s slick viral campaign.

Hard-core fans are the important part of the nature of these films. There’s this huge fan base and you want to honor that commitment and enthusiasm. It’s also an interesting way to plant ideas about the movie so people can understand the universe if you will. It allows you do dig in deep.

The press conference then concluded with my question. Like many of you who read our stories, I wanted to know why Webb committed himself to a sequel. His response was, dare I say, endearing.

After I finished the first movie, I needed some time off but then I went away for three days and I was bored. It’s so exhilarating to be a part of that universe. It is its own fuel. It’s hard to step away from it because your brain is primed. It’s exciting to play around in that sandbox.

Although the follow up to “The Amazing Spider-Man” won’t hit theaters until sometime in 2014, you can relive the excitement of the first film when it’s available Nov. 9 on Blu-Ray and DVD.

Be sure to check back at It’s Just Movies for my review.