Trailer: Save the Date 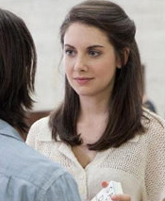 “Save the Date” may have comedic moments, but the trailer shows that it is not exactly a comedy. This fact is relevant because the main draw for “Save the Date” is that it stars Lizzy Caplan, Alison Brie and Martin Starr.

Caplan and Starr were both in “Party Down” and Brie currently stars in “Community.” Both shows are among the best and funniest (but not highly rated) TV shows of the past five years. The inclusion of those actors in any project intrigues me. When you combine them together, I get even more interested.

And while I would rather see them teamed in a comedy, I’m not opposed to seeing what they can do in a movie like this. All three have shown what they can do in dramas as well as comedies (in fact, Brie currently stars in both “Community” and “Mad Men,” arguably the best comedy and the best drama on TV).

Speaking of “Mad Men,” another of the film’s stars is Geoffrey Arend, who is best known for being married to Christina Hendricks. However, Arend has proven to be quite appealing in his own regard. For me, his most memorable role was on an episode of “Undeclared,” where he played a guy who just couldn’t stop doing impressions.

The final key player is Mark Webber — who I have seen in “Scott Pilgrim vs. the World” and “Life is Hot in Cracktown” – but he remains the actor about whom I know the least among the cast’s headliners.

Check out these five actors in action in the trailer for “Save the Date”:

With a movie like “Save the Date,” the casting is key. The plot, which involves commitment, doesn’t seem overly original. And the director, Michael Mohan, has made one feature film and four shorts – all unseen by me. So with the cast being my only real reason to see this movie or not, I’m going to lean toward yes and make a reservation to see “Save the Date” when it starts hitting theaters on Dec. 14.