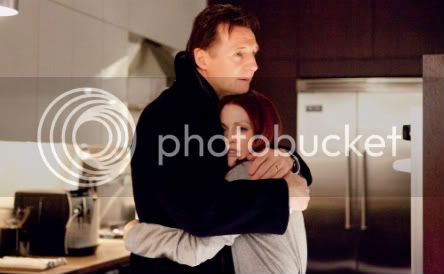 The Stewarts are a picture-perfect couple — on the outside. David (Liam Neeson) is a successful music professor and Catherine (Julianne Moore) is a gynecologist and the two share an expensive home with their teenage son, Michael, played by Max Thieriot. However, their personal lives are in deep turmoil. Michael is running around and disobeying his parents and Catherine’s personal insecurities are sky-rocketing to the point to which she believes that David is cheating on her. She quickly disregards the idea that he is just being “nice” when flirting with other women and following a search of his cell phone, finds a picture of him with another woman.

Hell-bent on finding the truth, Catherine hires Chloe (Amanda Seyfried) — a prostitute — to track down and try to seduce David. Things go according to plan and Catherine’s fears are quickly backed up with concrete evidence after Chloe returns and shares that David attempted to have sex with her. Fueled by personal dissatisfaction and also by doubt, Catherine hires Chloe several other times in order to fully understand the depths to which David will sink. However, this is where the plan starts to go off-track and it becomes increasingly clear that Chloe is not increased in a the least by David and is interested motivated by her infatuation to Catherine.

Though it’s bogged down by a plethora of problems, “Chloe” does have a few things going for it. Among these, is Amanda Seyfried’s excellent performance as Chloe. Paired along with Julianne Moore, who is an immaculate actress, the two have a certain unexplainable chemistry and this assists the film’s flow — especially during the second act, which slowly injects romance into the duo’s “professional” relationship.

But Liam Neeson lends a simply laughable performance. His character has no redeeming qualities and, for the most part, comes off as a wooden mannequin. It’s almost unsurprising that he’d cheat on his wife as he exerts no emotion whatsoever. This leads me to believe that this is not the type of role for Neeson, who is experiencing an unstoppable flood of highs and lows in his acting career.

There are also a couple moments in which the film’s awkward scripting just inspires groans from the audience. One such scene is when Chloe explains to Catherine exactly what transpired during her and David’s meeting. It’s just painful to see Amanda Seyfried spout off sexual innuendo after sexual innuendo in a “beat around the bush” sort of fashion and at times it just said me saying to myself “Just say you had sex!”

But it’s the climax that irked me the most. It’s simply too implausible and it becomes increasingly clear that Egoyan has no problem with “jumping the shark,” and this impacts the film’s entire ultra-realistic (and ultra-pessimistic) feeling.

However, in a last ditch effort, Mychael Danna’s musical score that help make the film more transporting. It’s absolutely hypnotizing at times and this really magnifies the atmosphere.

Though I’ll never understand it, I’ll admit that there are individuals willing to cheat on their significant others and this is becoming more and more prevalent in today’s society, so I guess “Chloe” is a timely film. However, it’s nothing more than that and just like David cheats out of Catherine’s love, Atom Egoyan cheats the audience out of their hard-earn money with his latest (and possibly worst) film.