While the vast majority of the public is familiar with the Star Wars universe primarily through the movies — and the animated series to a lesser extent — many people have followed further adventures in the Star Wars galaxy through what is known as the Expanded Universe. 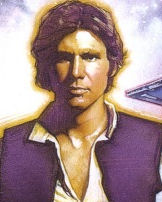 The Expanded Universe, which is explored in items such as books, video games and comic books, tells not only of the further adventures of the characters we all know through the movies, but also through the adventures of countless characters who lived before, during and after the film series.

My personal ventures into the Expanded Universe chiefly extended to the characters known from the movies and I especially enjoyed stories that followed those characters after the events of “Return of the Jedi.” I fondly recall the books series titled the Thrawn Trilogy (which began with “Heir to the Empire”) and the “Dark Empire” comic series.

I tried to keep up with the books that followed the Thawn Trilogy, but, in all honesty, they started to come out much too fast and I ended up having to drop out. It’s hard to imagine now, but there was once a time where it was impossible to get enough Star Wars. There were the comics, a few books here and there, the Droids and Ewoks cartoon series, the Ewoks movies, the Christmas special and a few other odds and ends, but it was all pretty manageable.

After “Dark Empire” and “Heir to the Empire,” however, the floodgates started to open and it became nearly impossible to keep up if you weren’t obsessive. It also became pretty difficult to classify what exactly was considered canon.

Fortunately, as the video below explains, there will be an effort to make sure everything lines up as much as possible going forward. I’m not entirely sure what to make out of what I have heard regarding Episode VII (casting, re-writes, etc.), but I do like the goal of aligning all of the Star Wars properties as much as possible.

Check out the video to get a handle on upcoming plans for the Star Wars Expanded Universe.