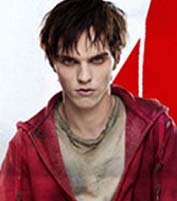 “Warm Bodies” is a 2013 romantic-zombie-comedy based on the novel of the same name by Isaac Marion. Nicholas Hoult is the zombie R. He lives in an America that is populated with zombies and only small groups of human survivors exist.

The trailer begins with some zombie humor, if you will, as R introduces us to the background of the plot and some of the major characters in this unlikely zombie story. There are two different types of zombies, it seems, in this post-apocalyptic world. There are zombies that that will eat anything that lives and breathes without any second thought called “Bonies.” The second group is like R — zombies that are at least conflicted on the matter. R goes through the motions of zombie life, until one day he encounters Julie (Teresa Palmer of “I Am Number Four”), a human survivor.

Something unexpected happens at their meeting and the more time that they spend together, the more R changes and infects the other non-“Bonies” zombies. They begin to heal themselves and begin to have feelings, remorse, and are responsive to their surroundings once again.

Now, since zombies aren’t usually capable of verbally expressing their thoughts and emotions, voiceovers are used in order to convey them. I must admit that the voiceovers were pretty entertaining in this clip. It’s sad to say that it seems that most of the plot is revealed in the trailer, but I’m hoping against hope that it is not so. I would like to see where Levine takes us in this zombie love story. The trailer is entertaining enough, and if you are intrigued with anything zombie related, the film looks like it will entertain to say the least.

We’ve seen a zombie comedy in Zombieland and the main characters are both living and breathing that fall in love. The human-zombie relationship twist is unique and I’d like to see whether it will be successful in the end.

“Warm Bodies” was written and directed by Jonathan Levine and also stars Dave Franco, John Malkovich, Analeigh Tipton, Cory Hardrict and Rob Corddry. It is due out in theaters on Feb. 1, 2013.