A First Look at the ‘Napoleon Dynamite’ Animated Show 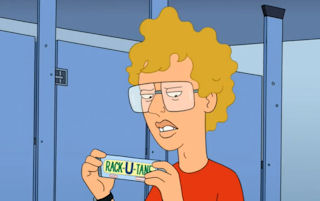 In 2004 “Napoleon Dynamite” hit the theatre. The obscure comedy made being ridiculously awkward funny and ensured that all the kids in school would be quoting the movie for years to come.

Now, seven years later when only the most die-hards inflict Heder’s nasally tone when saying “tots,” the Fox television network has decided to pick-up an animated companion to the movie for its 2012 line-up.

The clip below gives away the biggest selling point behind the series: all of the original cast members are back to lend their voices. Fox has had some great luck when it comes to its animated series, but I have a hard time believing that the “Napoleon Dynamite” animated series will match the success of “Family Guy” or “The Simpsons.”

The biggest problem is the audience. The series comes well past the idea time to grab the attention of people who loved the movie. Maybe if they did a “Napoleon Dynamite” sequel and then followed it up with a series, I could see the viewership going up. Overall, I don’t see the television series being able to carry an entire season from material provided by the movie.

What do you guys think?