A New Trailer for ‘Immortals’ 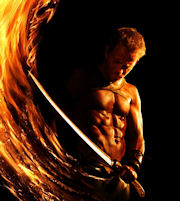 When you think of epic-action war stories, a few movies come to mind. One of them is “300” and whether you liked the movie or not, there is no denying it had a look and style like none before it. There have been many films that have tried to take that success and use it for their own films, but never have I seen anything quite as close in look and grandeur as “Immortals” by Relativity Media and Universal Pictures.

Directed by Tarsem Singh (“The Cell”) and boasting an all-star cast — plus a major budget — “Immortals” is at the forefront of the genre.

Here is a short synopsis of the film: Years after the tyrannical rampage of the Titans, Hyperion (Mickey Rourke) declares war on humanity. He is searching for the legendary bow of Epirus, a weapon of untold power created by the war god Ares (Daniel Sharman) that will allow Hyperion to free the imprisoned Titans and allow him to finally take his revenge on the Olympian Gods who defeated them. In accordance with ancient law, the gods are unable to meddle in human affairs of war, so the task of defeating Hyperion and his brethren is then left to a meager peasant named Theseus (Henry Cavill), who was chosen by Zeus (Luke Evans). Theseus has help from a priestess, Phaedra (Freida Pinto), and a slave (Steven Dorff) to defend his home and save humanity as well as the Gods on Olympus.

We have a new trailer with some brand new footage and from what I can tell, this movie is really starting to take shape to be a good action film. With a budget of $75 million, the effects and pure scope of the movie seems massive. We get action, rousing speeches and some great looks at the gods, the titans and the world that has been created. Watch the all-new feature trailer below and let us know if you think this movie could rival the likes of “300.”

“Immortals” will be out in theaters Nov. 11. Also starring are Kellan Lutz as Poseidon, Isabel Lucas as Athena, Corey Sevier as Apollo, along with John Hurt and many others.