Is Superman’s Comic-Book Makeover a Preview of His Movie Look?

Check out the recently-revealed image of Superman’s new suit for the comics. Since it was revealed, it has been the constant subject of comic-book fans worldwide. Some like it, other hate it, and others just don’t see much difference with it.

I like it — it is a slightly more modern take on the original, while still maintaining most of the classic elements.

It’s shiny, which leads me to think it is not cotton. Could it be silk, or leather? It has ruggedly-stitched seams at the shoulder, chest and throughout, which gives it a tougher feel in my opinion. The neck collar had been raised higher and I like this as well. I always love the look of the turtle neck or high collar on superheroes; it gives them a more military or authoritative look. The shield on his chest seems to be the right size and color, and the cape is still there too, so I don’t feel any major change had happened.

The one item that seems to be missing are the trousers, or underwear, that Superman wore on the outside. This has been the subject of criticism, jokes, and mockery for decades, and it has finally been updated. But, of course, many of those who complained about them are now complaining about the lack of them. It seems difficult to please everyone, though I feel the majority will like the new look, especially after we get to see more angles and views.

One important question is whether or not this will be anything like what Henry Cavill will be wearing in the upcoming “Man of Steel” movie. Are we perhaps getting a sneak peak at the super-suit for that movie, too? I think this suit would translate well to live action, and would be well received by today’s society, with all the cool and recent superhero movie bombardment. Superman needs to stay on top of all of those, and look better, too. After all, he was the first. 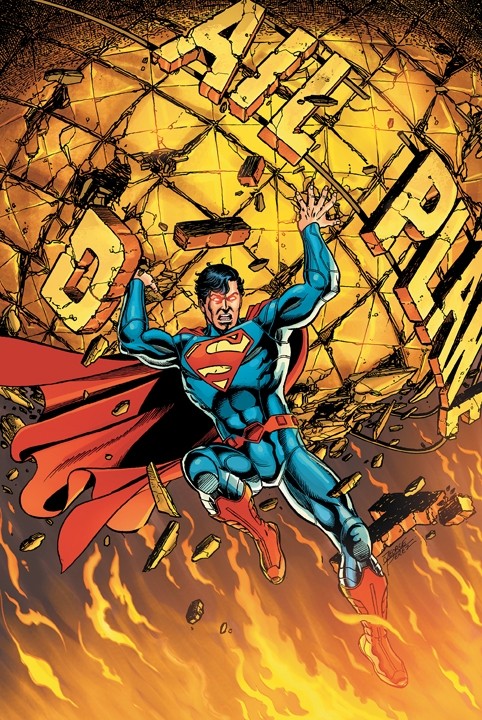