A Look at ‘Scream 4’ — Including Spoilers » Scream4_Spoilers 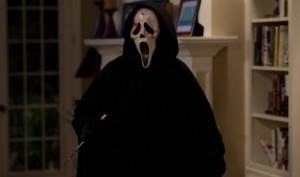 Warning: The rest of this story contains major spoilers from ‘Scream 4’ …

Fans of the “Scream” franchise are usually fans of the character of Randy (Jamie Kennedy). Once word that a fourth installment was coming out, speculations and rumors were in abundance regarding Randy. Would Jamie Kennedy reprise the role? If so, how would the character be written considering the fact that he was killed off in the second film?

Unfortunately, no such thing takes place in “Scream 4”; no Randy, no flashbacks. I was relieved at this fact because horror flicks are notorious for bringing people back from the dead. Heck, in the first “Scream,” Randy warned that the presumably dead killer always comes back for one last scare.

The other hot topic for this film was, of course, the ending. Who is the killer? Is there more than one killer?

There is, in fact, more than one killer — there are two killers. And what do you know? Sidney (Neve Campbell) has a little cousin, Jill (Emma Roberts), and she is one of the ones wielding the knife. And the second villain is Charlie Walker (Rory Culkin), a film geek who has a “thing” with Jill, that is, until she offs him, too! The few mentions of Randy that made it into the film did come from Charlie Walker, however.

Other rumors that I heard circulating were that Sidney was going to die, Gale (Courtney Cox-Arquette) was going to be killed off, or that Dewey (David Arquette) might also bite it. Squash all of the above. They all make out just fine. Come on, you gotta leave room for another sequel, considering the fact that writer Kevin Williamson has plans for a fifth and sixth installment. Do we get a scare when we are led to believe that Sidney does in fact bite the dust? Of course, but I didn’t buy it for a second.

So there ya have it. The original three all make it out alive (none of whom are the killers), Randy does NOT make an appearance, and Sidney’s sweet little cousin and a film geek pick up the knife. Didn’t you see all that coming?

This entry was posted on Friday, April 22nd, 2011 at 11:52 am and is filed under . You can follow any responses to this entry through the RSS 2.0 feed. You can leave a response, or trackback from your own site.