A Look at ‘Scream 4’ — Including Spoilers 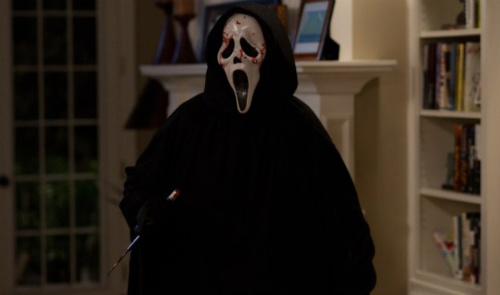 Opening scenes for horror films set the entire tone for the movie and really get horror fans going. I have heard more applause in theaters during openers for scary movies than anything else. A suspenseful opening with a strong jump moment is usually the way to go, after which the title of the film splashes on screen with some sort of sound effect, be it a solid scream or a slicing noise. “Scream 4″ is no exception to this successful combination.

I believe fans of the “Scream” franchise will be very pleased with this one’s opener. Is it as memorable as Drew Barrymore’s classic scene in the original “Scream?” I wouldn’t say all of that, but it’s a good one, it really is. But sadly that’s about the best part of the film, well that and I still have a soft spot for the original cast that came back for a fourth helping, Neve Campbell, Courtney Cox-Arquette and David Arquette.

Plot-wise, this film follows the usual “Scream” formula, which was great to see; it really bore the essence of the originals. Writer Kevin Williamson stayed true to Neve Campbell’s character, the core of the story, Sidney. Gale Weathers (Courtney Cox-Arquette) is the same foul-mouthed sarcastic control freak we all hate to admit we love, and her husband Dewey (David Arquette) is the same ol’ goofy guy we all have compassion for. Williamson brought that favorable style of his new characters, which is not an easy feat considering the time between en the third film and this one.

The new cast is a cool group of kids, including Emma Roberts, Rory Culkin and Hayden Panettiere, and I enjoyed them all. I was most looking forward to Marley Shelton’s role and she did not disappoint. “Scream” cameos are always much buzzed about, and everyone has been talking about and waiting for the Kristen Bell cameo, and I must admit, I loved her portion. In addition, there are cameos by Anna Paquin, Shenae Grimes, Adam Brody and Anthony Anderson.

From the sounds of it, I should have absolutely loved this film. So why didn’t I?

The ending, and the lack of development on certain plot points, along with some recycled ideas — that’s why. I’m sorry, but if the ending isn’t drop-dead amazing, your horror movie just died. If you spend time setting up a plot point and then don’t follow through, you have wasted your audience’s time. If it’s not only been done before but done before in the same franchise, you really need to re-evaluate the creative process.

I don’t want to give anything away because I do want people to get out and see this film, especially if you are a fan, but I did want to mention that a big part of what has made the franchise successful is that the villain has always made good use of modern technology. The entire first half of the film we focus drastically on how kids these days depend on their texting and social networking, and on the possibilities the villain might be exploring, but it turns out that concept is never fully realized or executed.

Not to take any stabs at Kevin Williamson, but I felt a little cheated. The first two “Scream” films had some of the most kick ass one-liners and short monologues; “Scream 4″ does not. In fact, some of the dialogue was a tad corny. It wasn’t horrible, but it wasn’t as clever as in the past. Some stuff that made the original films successful was lacking here, but at the same time, it still felt the same. Sets were brought back and used in different context, and you really just jump back into the town of Woodsboro and it doesn’t seem like it’s been a decade since your last visit.

I’m still a huge fan of this series, it’s one of my favorites, even after the third one. I enjoyed “Scream 4,” I was let down a little bit. But I still felt connected as a fan who knows so much about the film and the characters. Check it out. It’s got some good stuff, it’s got some not-so-good stuff, but it’s still worth a peek, even if you have never seen the first three films.

Note, if you click on the picture at the top, it will take you to a look at the spoilers for “Scream 4.” Don’t read it if you haven’t seen “Scream 4” yet …