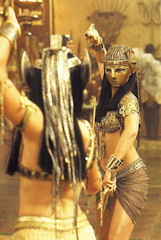 There are many stories about Ancient Egypt that have turned out to be big on-screen movie hits. From the tale of “The Prince of Egypt” to “The Mummy” trilogy and the life of the most beautiful woman in her time, Cleopatra, these stories captured the mystic side of this culture.

But do we know all about the secrets that this ancient civilisation holds? Have we covered all legends about the life of Ancient Egypt that became common cultural references in the modern era?

Here we cover some stories you have probably never heard of that could easily be an inspiration for one of the next big movie hits.

Nehmes-Bastet – the Egyptian priestess singer
A newly-discovered burial chamber in the Valley of the Kings back in 2011 provides a glimpse into the life of an ancient Egyptian singer and priestess. This woman lived during the Third Intermediate period, an unsettling time when Egypt was split by conflicts between the pharaohs in Tanis and the high priests of Amun in Thebes. According to the records, Nehmes-Bastet used to be a celebrity back in her time who performed religious festivals and ceremonies to worship Amun, the king of gods.

There is a debate among the historians in terms of her performances and some believe it may have been close to rap music. It will take a few more years to investigate the remains and the lifestyle of this lady. The story definitely sounds promising. Think about it – an Egyptian rap performing priestess who lived in a time when the civilisation was torn apart and slowly collapsing around her. We would love to see that movie, and we are particularly looking forward to the soundtrack.

Behind the Eye of Horus – a story of betrayal
The Eye of Horus is one of the most popular Egyptian symbols. Also known as the Wadjet, this symbol is believed to provide protection, health, luck and transformation. People consider this symbol as an amulet and it can be found on many things like bracelets, gift cards or tattoos. It even appears as a theme in the world of online games, as in this Eye of Horus slot game.

Even though we are quite familiar with the symbol, some of us are not well-informed about the story behind it. The origins of this story can be found in the myth of Set and Osiris. Egyptians believed Osiris was the king of Egypt and that his brother Set managed to kill his brother and become the new king. Osiris’ wife Isis managed to temporarily bring her husband back to life with magic and prayers, and eventually became pregnant with Horus.

He was raised only by his mother, and later in his adolescence wanted to avenge the death of his father. Legend says that in one of the battles, Horus’ eye was ripped and torn into pieces. Another version says that it was Horus himself who gouged his eye out as a sacrifice to bring his father back from the dead. With the help of Hathor, the god of wisdom, the eye of Horus was restored and since then it is believed it possesses healing properties. This story showed up as a theme in movies like “Gods of Egypt,” but still, the plot is definitely worthy of a braver and bolder on screen takeover.

According to the Oracle
The law system in Egypt was considered to be very strict and detailed, and maybe a bit controversial. When there were trials, the jury consulted a holy oracle with the final word in a trial. We saw this happening similarly in the first part of the Harry Potter series, where a magic hat separated the pupils to the groups they belonged to.

Think about a scenario when someone would want to take the advantage of the oracle. Even better, the story of the Oracle can expand to a different detective and secretive level. Like the “Sherlock” series, it would provide answers based on facts and figures to prevent the wrong person going to jail. It would be interesting for this object to have half-human features and fall in love with one of the accused.

The question of beauty — an Egyptian beauty salon
There should be more comedies set in the past because the humour back then sure was very amusing. Anyone who has been to a beauty salon has heard and seen the diversity of people in one place, and heard their stories as well. Imagine hearing something very intriguing in between crushing carmine beetles for a red lipstick (a beauty routine from Cleopatra).

Those stories would be very interesting, since ancient Egyptian women had significant legal freedom that women nowadays have only gotten in recent centuries. Egypt is the place where cosmetics were first invented, including the kohl eyeliner created with galena and malachite, mixed and ground up with materials like soot or almonds. The Egyptians fancied chemicals and perfumes, but they had to get those from somewhere. Maybe there were some mysterious chemist-makeup artists who knew the secrets of the Egyptians. Think about a story where they are able to make the perfect formula for getting the man/woman you love. Indeed, this story has the potential to be the next box office hit.