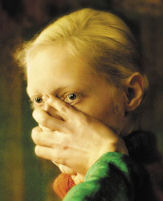 Kicking off the year with a powerhouse of an essay on the horrors of war, director Kantemir Balagov weaves together stories of the Siege of Leningrad. As one might expect, all three are bad, ending in the briefest ray of light. Some survive and some do not. As in all wars, the most innocent, including the children, suffer the most.

The screenplay by the director, co-written with Aleksandr Terekhov, is set in 1945 in the wake of the Siege. Leningrad has been reduced to rubble and the camera quickly focuses on a clapboard hospital staffed by Dr. Nikolay Ivanovich (Andrey Bykov) and a shattered nursing staff. Many medical personnel have been killed during the war and the ones left have seen the worst mankind has to offer. In war’s wake, as many survivors want to die as want to live and the heroic doctor turns out to be no exception.

The doctor is no exception, nor is his trusted nurse Iya, in a timeless performance by Viktoria Miroshnichenko. Iya is suffering from locked-in syndrome to the extent that she cannot communicate verbally. As director Balagov turns up the temperature, truths emerge as to why she is incapable of interaction and why she commits the most horrible of sins. Notice is served that what became known as the most brutal battlefield in the world’s most brutal war will be served up without costume.

Two young men, surprisingly frisky, cruise the streets in a car, looking for women. They take in Masha (Vasilisa Perelygina) and Iya, who prove too tough to handle. The men and their car, with their money and their fuel, are people out of a dream, persons from before the war looking for a good time. The two women are exactly the opposite. The products of war, each is entirely capable of turning the tables on predatory males and eating them for dinner.

Even so, one of the men, Sasha, runs into Iya at the hospital where his rich mother is handing out charity to crippled soldiers. He falls in love, or at least tries to, with what is left of his emotions. In a baldly political screenplay, the women have more sincere feelings for each other, and Sasha and his mother are upper class walking dead who may be even sicker than the worst of the Leningrad maimed.

Riveting in its unbridled condemnation of the upper classes relatively untouched by the slaughter, the screenplay finds sisterhood in the two female war veterans. There is a nod to lesbianism even as the film goes light years beyond that. Genuine feeling lies buried in the rubble and shell craters of the city but it will not be found in the establishment.

Few films in the past year show such solid acting from the two leads and every one of the supporting staff. The viewer yearns to see every one of them on the screen, there is not a dull character, or a dull performance, in the entire movie.