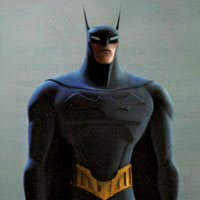 We previously promised to keep you posted on all new updates for the upcoming animated TV series titled “Beware of the Batman,” and we now have a new poster to show. The longtime-coming series is still set to hit our small screens this summer on the Cartoon Network, though we still have no exact premiere date.

Although it does not show much, the poster below keeps the same dark style and feel we have gotten with every other tid-bit and small preview released for the show until now. We have a close-up of the much younger interpretation of the Dark Knight. The logo is the same and the white eyes are the same as with all previous posters.

As a matter of fact this image is taken from the teaser clip we previously saw. But at least this is an attempt to keep our interest cognizant.

A cool, new take on the classic Dark Knight franchise, “Beware the Batman” incorporates Batman’s core characters with a rogue’s gallery of new villains not previously seen in animated form. Along with backup from ex-secret agent Alfred and lethal swordstress Katana, the Dark Knight faces the twisted machinations of Gotham City’s criminal underworld led by the likes of Anarky, Professor Pyg, Mister Toad and Magpie. Produced by Warner Bros. Animation, this action-packed detective thriller deftly redefines what we have come to know as a “Batman show.” Featuring cutting-edge CGI visuals to match the intricate twists and turns of the narrative, Batman steps out of the shadows and into the spotlight for an entirely new generation of fans. With WBA’s Sam Register executive producing, and Batman Beyond’s Glen Murakami and Scooby-Doo! Mystery Incorporated’s Mitch Watson producing, “Beware the Batman,” based on characters from DC Comics, is coming soon to Cartoon Network.

Keep it here for all future updates on this project.

What do you think of this cool new poster?