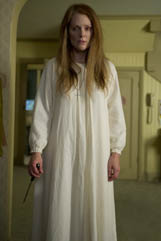 Ever since it was announced that the “Carrie” re-imagining would have its release date pushed back from March 15 to Oct. 18, we have not heard much about the film. The move was made for a few reasons, including distancing itself from “The Evil Dead” release, as well as giving it a more appropriate fall release date — just in time for Halloween.

Well now we have a full trailer for the Kimberly Peirce-directed film. We get to see the full transformation of Carrie (Chloe Grace Moretz), a shy, secluded teenager who is at the mercy of her religiously-fanatical mother (Julianne Moore). Carrie mysteriously develops telekinetic powers and all hell breaks loose when she is tormented by her peers until she breaks and loses control.

One of Stephen King’s most famous books, “Carrie” received the big screen treatment more than once – the most notable Brian De Palma’s 1976 version that made Sissy Spacek a star — as well as a few failed television attempts.

After all of the teasing and waiting, you will no longer be in suspense as you can view the full trailer below.

So what did you think? My first reaction is that I am impressed with the way the movie looks and the feeling I get from this trailer. While I have not read the novel, I have watched De Palma’s film multiple times and each time I get this feeling of pain and anger for Carrie White. Although the atrocious acts she performs when pushed to the edge are egregious, I can understand where she is coming from.

Having been bullied at a very young age – before my massive growth spur — I had a few students at my elementary school who chose me for whatever reason to relentlessly attack on a daily basic. Although usually it resulted in tears, I was at one point so angry that I tried to fight them, which resulted in the cowards abandoning their quest to hurt me and move onto some other poor kid. So I can definitely relate to the rage and pain the character must be feeling.

I have read that this isn’t a straight-on remake and this film will follow the novel much closer than the original film. I feel like there is much more emphasis on her developing telekinesis and I am hoping they choose to play on her experimenting more with her supernatural powers as it would make sense with the story. Although I don’t want to spoil the film’s final result for anyone who is unfamiliar with this story, this trailer makes it pretty clear that there will be blood and lots of fire involved and this will be a prom that the small town of Chamberlain, Maine, will never forget.

I love the look they have given Moretz and Moore as these homely, almost hippie-like recluses in the way they dress and with their unkempt hair. Julianne Moore looks especially crazy in her long dresses as she spout religious analogies at her daughter. I am happy to hear a few famous lines that are synonymous with the original movie in this trailer and it makes me hope that this film could be quite good and surprise many people.

While we have seen Chloe Grace Moretz in darker roles before – such as Hit Girl in “Kick Ass” as well as Abby the vampire in “Let Me In” — this appears to be one of the craziest characters I have ever seen Julianne Moore portray and I love her in it. I’m sure when I watch the film I will actually hate her, but that just means she is doing a good job in the role.

This trailer doesn’t prominently feature many of the supporting cast, but we also have Judy Greer as the teacher who is looking out for Carrie’s best interests and Gabrielle Wilde as a bully who has remorse and asks her boyfriend (Ansel Elgort) to take Carrie to the Prom to make up for any pain she has caused her. The film also stars Alex Russell (“Chronicle”), Portia Doubleday (“Youth in Revolt”), William MacDonald (“Slither”) and Connor Price (“Cinderella Man”).

What are your thoughts on this new full trailer and do you think this will be a decent movie (or even better)? Is there someone else you think should have been cast in the main role of Carrie White? Leave a note in the comments section and, as always, check back often here at It’s Just Movies for entertainment news, trailers and movie reviews.