Book vs. Movie: The Sword and the Stone 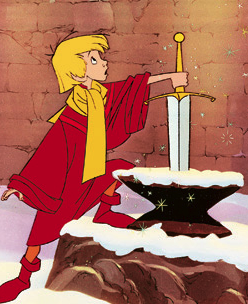 Countless tales have been told about people going from misfortune to success. As kids, we’ve heard the stories of Cinderella with her glass slippers, and of Snow White and her seven dwarves. Among them all, one has stood as a great legend, being retold through generations in various ways. A popular rendition is T.H. White’s The Once and Future King, a classic novel from 1958. Based on this book, “The Sword in the Stone” was created in 1963. Although both are generally well executed, White’s novel is better than the movie.

There are major differences between the novel and the movie, but both stay true to the legend of Arthur’s humble beginnings.

While stumbling through the woods, Arthur, nicknamed “Wart” by Sir Ector and his son Kay, finds a wizard named Merlyn. Merlyn, knowing the future, decides to mentor him by turning him into different animals to convey different principles. The Wart faces many obstacles, both magical and not, which help prepare him for the challenging future ahead.

Though the movie was entertaining, the development of the characters was unimpressive. They were over-exaggerated, and this leads to the loss of some notable qualities. From the too-clumsy Merlyn to the oafish Kay, the movie is filled with poor characters. Perhaps the most disappointing was the development Arthur himself. Though he is not especially strong or assertive in the book, he is further weakened in the movie. As a fish, a large pike tried eating Arthur, and Merlyn’s owl had to save him. Although he did use some intelligence in his escape, he would have been eaten without help. Though entertaining, the characters of the movie pale in comparison to their novel counterparts.

In addition to these disappointing characters, the movie seemed to stray away from the true meaning of Arthur’s lessons. In the novel, Arthur turns into a variety of animals, and with each transformation learns about dangers of different types of government. One such example is during his lesson as a fish, when Arthur learns about how corrupt a monarchy can be. As a fish, he visits a pike who is king of the moat. The large pike says that only power is important in life, and then tries to eat Arthur. In the movie, he is to learn that brains beat brawn, but even this message is clouded, as Arthur does not significantly achieve anything using his mind, in fact needing to be saved from several dangerous situations by Merlyn.

The legend of King Arthur is well-known, with several different versions circulating around the world. The book The Once and Future King, and the movie “The Sword in the Stone” are two examples, both alike and different. Though they both portray the legend well, the movie was not as profound as the book.

Editor’s Note: Jaqueline Yu’s article was chosen for publication on IJM as part of a film review project in her freshman Pre-Advanced Placement English classroom at Skyview High School in Vancouver, Wa. Skyview is part of the Vancouver Public Schools. More than 120 students submitted reviews. The three runners-up were Brinley Hadfield, Grace Chandler and Elena Mack.

Tags: "The Sword in the Stone", Disney
Posted 30 Apr 2011 by Guest Writer in Opinions