Cloudy with a Chance of Meatballs 2: Trailers 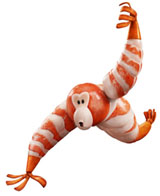 It’s always been Flint Lockwood’s (Bill Hader) dream to be recognized as a great inventor, but everything changes when he discovers that his most infamous machine — which turns water into food — is still operating and is now creating mutant food animals- “foodimals.”

In the first film, Flint and friends were able to turn the machine off, but all the residents of Swallow Falls had to leave the island so that things could be cleaned up. This time, with the fate of humanity in his hands, Flint and his friends must embark on a dangerously delicious mission back to Swallow Falls, battling hungry tacodiles, shrimpanzees, apple pie-thons, double bacon cheespiders and other food creatures to save the world again.

The majority of the main cast from the first film return to the reprise their roles, with the addition and subtraction of a few others. Bill Hader returns as Flint Lockwood with his love interest Sam Sparks voiced by Anna Faris. James Caan is back as Flint’s father Tim Lockwood. Andy Samberg returns as Brent McHale, as does Neil Patrick Harris as Flint’s trusty lab partner Steve the Chimpanzee. Will Forte, who voiced Joseph Towne in the first film, will voice Chester V in the sequel and Benjamin Bratt will voice Manny the camera man. Terry Crews replaces Mr. T as Officer Earl and Kristen Schaal joins the cast as an orangutan named Barb.

The three trailers below for the most part, have many of the same scenes with tiny differences that if you’re not watching closely, you won’t be able to tell. Overall, the trailers do reveal the plot of the Sony Pictures animated film and looks to be a good time for the kiddos.

“Cloudy with a Chance of Meatballs 2” lands in theaters Sept. 27.

As a bonus, check out this new motion poster for the sequel: