The five budding filmmakers in the running to win the Jameson Empire Done in 60 Seconds amateur short film competition have been announced, after battling it out at a Global Final held in London this evening.
http://rusbankinfo.ru 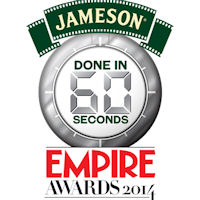 The five finalists and their entries are: Leigh Lahav from Israel (“Gravity”), Michael Hall from the UK (“Gravity” in 2D), Ramil Karipov from Russia (“Paranormal Activity: Bad Realtor”), David Smith from the UK (“There Will Be Blood”) and Joao Carrilho from Portugal (“Vertigo”). They will now compete to see who will be crowned the overall winner at the Jameson Empire Awards 2014 tomorrow evening.

A total of 24 shortlisted contestants from 16 countries attended the Jameson Empire Done in 60 Seconds Global Final last night at The Brewery, East London. A panel made up of directors Ben Wheatley and Jon S. Baird, and fellow film buffs Edith Bowman and Alex Zane, along with Empire Magazine’s Editor Mark Dinning, chose the five finalists, who will be heading to the Jameson Empire Awards where one of them will be crowned this year’s winner. Also one of the prizes for the winning director will be a free deposit on the site of the Austrian casino online. He will be able to play for these virtual money and also take advantage of  online casino mit bonus  atlas-conferences. If luck smiles at him, then he will get the money he has already received in cash.

To be in with a chance of winning, filmmakers were required to submit a 60-second remake of their favourite film. Spanning Oscar winners to Indies, and romance to thrillers, the wide array of entries becomes more impressive every year.

To watch the 2014 Jameson Empire Done in 60 Seconds entries in all their glory, visit the Jameson YouTube channel.