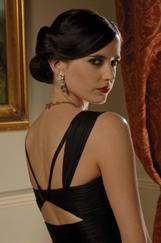 The sequel to “Sin City” has been a long time coming. With production continuously pushed back, like many of you, I was beginning to wonder if it would ever happen. Thankfully, my disappointment diminished last spring when Dimension Films announced “Sin City: A Dame To Kill For” would open nation-wide on Oct. 4 and that production was underway.

The screenplay, penned by Frank Miller, was polished by William Monahan (“London Boulevard,” “The Departed”) and after the approval of Rodriguez casting began. But who would play the key role of Ava Lord? Angelina Jolie was rumored for the part back in 2007, as was Rachel Weisz. However, Jolie stated just recently she desires to act less and focus more on her children and directing. Weisz wasn’t pursued as heavily as Jolie.

Nevertheless, putting any conjecture at bay, it has been announced that Robert Rodriguez found his Ava Lord in Eva Green (“Casino Royale”). Perfect casting. I have no doubts Green will do a good job.

Returning to “A Dame To Kill For” are Jessica Alba, Mickey Rourke, Bruce Willis, Rosario Dawson and Jaime King. Replacing the late Michael Clark Duncan as Manute is All State voice and former “24” president Dennis Haybert. Dwight was also recast. Filling his shoes this time around is Josh Brolin. Those familiar with the source material know why this was necessary. Yet, it doesn’t mean Clive Owen won’t return.

In an official statement, Rodriguez and Miller said this about their choice:

Ava Lord is one of the most deadly and fascinating residents of Sin City. From the start, we knew that the actor would need to be able to embody the multifaceted characteristics of this femme fatale and we found that in Eva Green.

I totally agree with them.