If you were in a band at any point in your life, the thought of getting that old band back together probably has an undeniable mystique about it. Or maybe your favorite band has broken up, but deep down, you want that band back together. New film, “The Incoherents” follows a group of forty-somethings who are seduced back into their rock-n-roll heyday, a charge led by the band’s front man, Bruce, as poignantly portrayed by the Jeff Auer who also wrote the script and produced the film.

The film takes a fun and brutally honest look at the hopes, lives, dreams, trials and tribulations of the band members as they work to get “The Incoherents” back together. The writing is brutally honest, funny at points and manages to skip the over-the-top clichés while focusing more on real life hurdles that band members would surely encounter in this situation.

Auer was never himself in a dedicated band, per se, but he did have a time with a group of friends long after college where he had a “fake band” as he calls it. He and some friends came together, jammed a bit and wrote a few songs. Then the group met up in Chicago, played out a bit and they all loved it. “We had worked with an engineer who had worked with John Lennon,” explains Jeff Auer, a lifelong music fan. “It was probably the worse day of his life because he had to work with us… But it turned out to be kind of fun!” The group continued to write riffs and lyrics via email, and they recorded songs in New York in Boston before dying off after having a disagreement over a song. The group had already been friends for nearly two decades. “Obviously, the friendship was more important than the little band thing,” says Auer. “A friend suggested that I write a screenplay about this and that is where the idea for this whole thing came from.”

Auer and Alex Emanuel wrote all the songs in the film and did an exceptional job at creating music and lyrics that were both enjoyable and placed the music properly in the late 80s or early 90s vein. The film was directed by Jared Barel who did a great job of moving between capturing music club culture and the day-to-day doldrums that are often adult life.

Although they hadn’t met each other before shooting this film, Auer and Barel shot a short proof-of-concept prior to shooting the feature length version of “The Incoherents.” “What I picked up about him immediately was that he was very smart, very driven, young and ambitious,” says Auer. Although Barel’s style was different than what Auer had initially envisioned, Auer knew his director had a keen eye for visuals, although Barel’s background was as a graphic novelist and comic book artist. Auer continues, “I picked up on his talent initially just from that one day. He pulled in stuff on this final film that I never would have done. But what he did brought out all the colors and the flavors that I wanted and then some.” Barel’s art experience spilled over into the creation of the film’s poster, which imparts a very iconic Springsteen-esque vibe. It was fitting as Auer and Barel are both from New Jersey.

“I’m proud of the movie, but most of that is the cast and the acting,” Auer explains. “As the writer, I love the performances. They’re taking something on the page and bringing more to it than what was on the page. Literally every actor did that.” One notable supporting role in the film was Annette O’Toole and one fun cameo was the lead singer for the group Spin Doctors, Chris Barron.

Wearing the hats of writer, producer and actor on a film brought with it a lot of work and some distinct challenges, too. “We made this thing on a shoestring,” Auer says. The original proof-of-concept was shot back in 2012 and it took several yeas to get the funds together to shoot the feature length version. The final film was shot in four segments on various weekends. “I was putting tons of stuff on my credit card,” Auer laughs. “It was a classic indie film… Just trying to find any way to get it done.” The producers all pitched in to handle every job on and off set to get the film finished. Overall, funding was the biggest challenge on “The Incoherents.”

“Now I know what it’s like to run a small business because you’re literally worrying about every single aspect of what is going on!” explains Auer. “I’d literally yell, ‘Cut!’ on a scene and then I’d run and go set up a catering table. It’s a labor of love.” The feedback on the film has been positive and the realism is what is continually praised.

Auer is working on another Jersey-centric script, but he’s also keeping his eye on the current state of the pandemic. “Right now, the script I wrote doesn’t feel relevant to what is going on,” says the full-time actor and seasoned voice over artist. 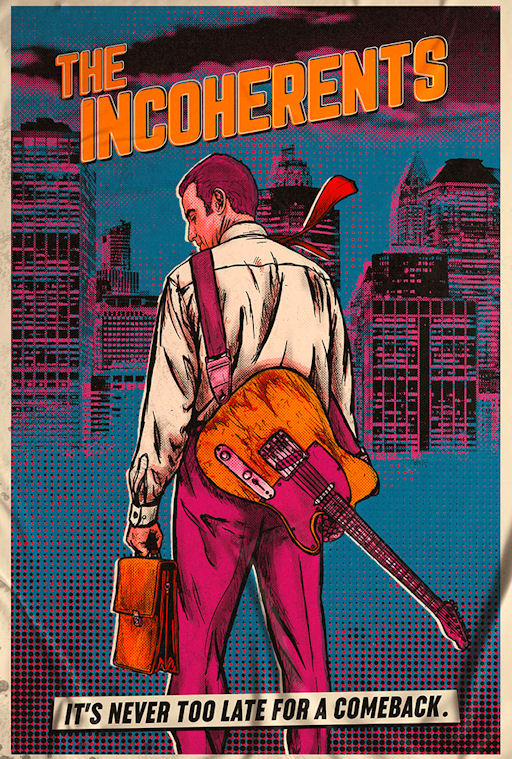 The film festival run is finished and now the film can be seen on iTunes VOD everywhere. For additional information on “The Incoherents” visit www.TheIncoherents.com.