The short film “Silence” is a poignant and insightful look at the life and struggles of a young girl who does not hear. In telling this story, the writer and director Brwa Vahabpour imparts a unique narrative that takes the viewer on a journey with a sharp turn toward the end.

“My mother’s experiences of suddenly losing ability to hear and the following struggle inspired me to tell this story,” explains Brwa Vahabpour. “The initial idea was for a feature length film. While developing it, we got support to make a short film with the same subject matter.”

Vahabpour leaned on his mother’s experiences as a main source of knowledge and insight in developing the often frustrating and isolating world of lead character Bahar and portrayed by Ebru Ayse Cakir. “The deaf community in Norway and the lead actor Ebru Ayse Cakir have been very inspiring both in the writing process and during production,” says Vahabpour.

Cakir commands the audience’s attention and draws viewers into her daily dilemma of living life as an outsider. “Ebru is the most fearless child I’ve met!” says Vahabpour of his young lead actress. “Whether it’s an intimidating animal or a personal conflict, she is not afraid to confront it. She confronted the task of portraying the character of Bahar with joy and awe. She knew what this story could mean for children like Bahar and herself. Because Ebru is hearing impaired, we communicated through sign language during the shoot. A lot of the power she has in the film, Ebru brought herself. It was a matter of releasing it in the right moments.”

Telling the story through a soundscape and with limited dialogue was challenging. “How can we tell the story as subjectively as possible without removing all sound?” Vahabpour inquires. “How would you tell the story of a blind person without the screen being totally black? I decided to base the subjective sound on Bahar’s imagination and memory.”

What is so quiet, yet so loud that it is almost deafening are the pops, clicks, smacks and snaps that occur during the short film that relay to the viewer how much we take for granted in being able to hear. On the other side, most sounds that a deaf person does not hear ultimately create another world for them.

Vahabpour was faced with many challenges in making his short film. He shot it in August and the heat made shooting difficult, especially for the director and others working on the film many of whom are from Norway. “Also, the production crew consisted of people from all over the world, so there was a lot maneuvering between different languages,” the director explains. “The challenge I found most rewarding was the communication I had with Ebru on set, especially in the tree scene. It’s not easy directing a child actor sitting on a tree some meters above you, in sign language, during nighttime.”

To date, the director has strictly shot short films. “For me, short films and feature films have different potentials for telling a story,” explains Vahabpour. “I like the short format and treat it as its own. I am working towards the longer format and currently I work as an episode director on a TV series for the Norwegian Broadcasting Corporation and Arte. At the same time, I am developing ‘Silence’ as a feature film with Oslo Pictures and producer Renée Mlodyszewski.” 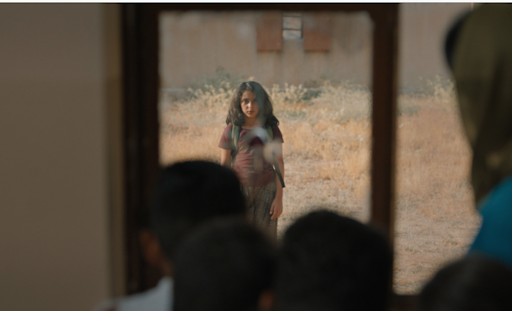 “Silence” will enjoy its international premiere in the Odense International Film Festival, which is scheduled to take place online and in person. Afterwards, it will go on to other film festivals. You can follow the film on Facebook and Instagram for updates about festivals. “Because of the audio-visual potential (for ‘Silence’), I would recommend people to experience the film in a cinema,” finishes Vahabpour. “Because of the COVID-19 situation, many festivals are doing digital screenings. So now, more than ever, short films will be more accessible to the general public.” Learn more about “Silence” on its official IMDb page.