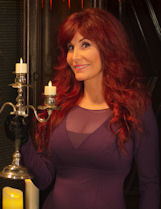 Prolific producer, writer and director Suzanne DeLaurentiis (“Rocky V,” Mannequin 2,” “10th & Wolf,” “D-Railed,” and “Black Gold”) was lucky enough to keep working through the pandemic, and also debuted a new horror series entitled “Suzanne’s Saturday Night Scares.” The series is currently showing on AppleTV and Amazon Prime, and will begin showing on six other platforms in the coming months.

Serving as both producer and host, DeLaurentiis screens older horror films that broke ground at the time and served to usher in new sub-genres of horror films, like those based around sororities. She even enlists the talent and insight of special guests like Morgan Fairchild and Lara Parker.

If the DeLaurentiis name sounds familiar, it should. Her cousin is the late Dino DeLaurentiis, who produced hundreds of movies including “Barbarella,” “King Kong,” Flash Gordon,” “Conan the Barbarian,” “Blue Velvet,” “Hannibal” and many others. “I actually worked on a couple of his movies in the late ’70s and early ’80s,” she said. “He’s certainly an icon and was a mentor for quite a few people in the industry, I’m sure. He’s made over 600 movies in his career.”

“Suzanne’s Saturday Night Scares” is a pet project for DeLaurentiis. She says, “I was trying to think about what I could do now that I’m getting a bit older and toward the retirement end of things. What can I do that is low stress, low maintenance, fun and something I enjoy and have a passion for? It was a perfect fit for me.”

Although she could have chosen any genre of film to explore in her new series, she has a passion for horror films. “We’ve made quite a few horror movies in the past and I’m in post-production for two right now – ‘It Crawls Beneath’ and ‘Reed’s Point,’ about the Jersey Devil.”

“I’ve always had a passion for horror, but especially for classic horror. That’s what I’m really a big fan of!” She counts the original black and white film “Nosferatu” and more modern horror film Bram Stoker’s “Dracula” among her all-time favorite horror flicks. 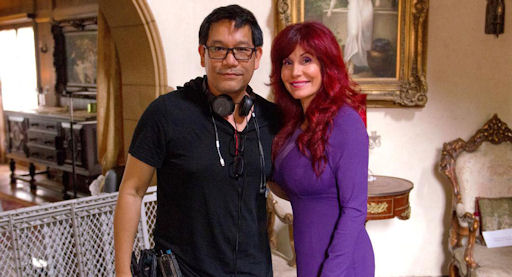 In selecting films to screen as part of her series, she always chooses classics. “We get quite an extensive list of movies to pick from, and, obviously, they have to be in the public domain,” DeLaurentiis explains. “They’re old and it’s hard to track down actors or the original producers.” If actors from the films she screens are not available, she’ll choose actors who have appeared in similar style horror films to be special guests on her show.

“As far as how I pick these movies, it’s a combination of things. We try to pick movies that are unique, maybe not as popular as what people are accustomed to as far as classics, but then we’ll try to find ones that everyone has seen. It’s a process. Of course, I love them all!”

The show’s format starts with an introduction of the film by DeLaurentiis, then at the breaks, she will roll in trivia, facts and information about the production. Toward the end, she’ll bring in her special guest followed by outtakes and bloopers at the very end of the show. “The show’s age demographic is about 40 to 70, but we’re hoping to get some of the younger crowd, too,” says DeLaurentiis.

To help keep things extra creepy, the show is shot on location at a historic haunted house in California that was built in 1929 and known as Sunny Gables. 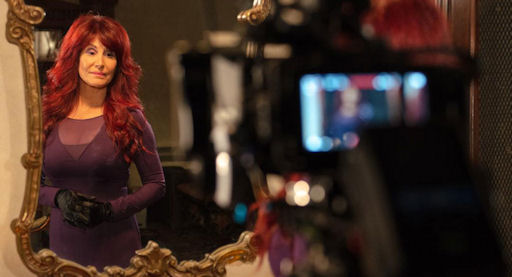 A devoted philanthropist, Suzanne DeLaurenttis founded the “Operation Hollywood” program
where she trains veterans for careers in the entertainment industry. In 2010, she was given
a Commendation Medal from the United States Military for her work in the areas
of the mental and financial well-being of veterans.