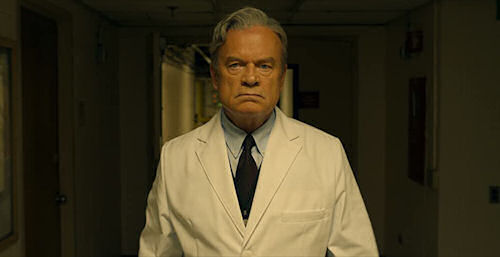 “What is God’s will? How do we interpret it? How are we to understand it and act upon it?” asks Father Dunbar (Colman Domingo) of his congregation. But he also sits on the Transplant Committee, where he became a new voting member at the behest of a top investor. He gets to decide who lives and dies, so the question, most immediately, applies to himself.

The group meets and must decide which of their 1A top-rated patients gets a new available heart from a healthy 19-year-old killed in a bike accident. Should it be the genius older woman? The middle-aged and over-weight beloved family man, or the drug addict son of the investor for the transplant center?

Austin Stark, a masterful, award-winning director, artfully takes the film back and forward in time during the deliberations for who gets the newly available heart. Dr. Boxer (Kelsey Grammar), an innovative heart transplant surgeon, is on the committee. He is very close to groundbreaking DNA technology that would make pigs successful organ donors. However, before that can be a reality, he needs a transplant himself.

Each committee member represents a different moral angle. Boxer struggles with his own self-interests. Dr. Gilroy (Janeane Garofalo), as the director of the transplant center, has a long-range, practical interest in appeasing the investor. With an investment so much more can be done to help even more people. Her argument seems to take priority until Dr. Taylor (Julia Stiles) learns compromising information about the investor’s son.

Stark has written and directed a thoughtful film reflecting standard moral theories that apply not just to the Transplant Committee, but to human decisions in every area of life. He has the preacher, the doctor, the leader, the lover, and the psychiatrist struggling with their own views. The viewer may take sides too. What is right and what is wrong – in this case and in every case? Are there exceptions?

Whether we delve into Aristotle, Kant, religious texts or cultural relativism, there are conflicting ways of thinking. Stark tells the story through the lens of time so that the viewer, knowing what was before the decision, knowing the decision, and then knowing what happened after the decision, has a much clearer perspective than the participants.

Outstanding in story, thought, direction, and acting, “The God Committee” premiered at the Tribeca Film Festival June 20 and was wide-released July 2.