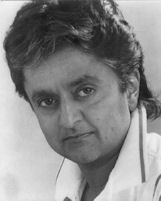 There are some great actors who have started out in comedy and have gone on to have illustrious careers in film. Entertainers such as Steve Martin, Jim Carrey, Jamie Foxx and the late, great Robin Williams have left indelible marks in film. Actor Deep Roy had his earliest start in stand-up comedy, and the Kenyan-born and London-raised actor has a filmography that any actor would envy. I recently caught up with Deep Roy just as he was getting ready to head to Hawaii to visit family.

Roy’s resume includes some of the most iconic films in history. From “Flash Gordon,” “The Dark Crystal,” “The NeverEnding Story” and “Star Wars: Episode VI – Return of the Jedi” to “Big Fish” the latest “Star Trek” films and “Charlie and the Chocolate Factory,” his career continues to delight and entertain audiences of all ages.

Growing up, Roy had some challenges in school as kids can be cruel and would tease him about his stature. He counts himself fortunate enough to have had parents who were able to go on to send him to a private school. “It made me work doubly hard to prove to them that that size has got nothing to do with it, and it’s your brain that counts,” says Roy. Reflecting his always-present gratitude, he recalls saying to his father at the time, “Dad, you have done so much for me, you make me feel 6-foot-5.”

Getting His Start
Initially, Roy set out to study accounting in London. He had a change of heart, switched gears and decided he wanted to attend drama school and become a comedian. He did stand-up comedy for nearly five years and then landed an agent. Sadly, Roy’s father passed away shortly thereafter.

Then things started happening in Roy’s career with his first TV role in “The New Avengers” followed immediately by his casting as the Italian assassin in “The Pink Panther Strikes Again” with late iconic actor and comedian Peter Sellers. There was no looking back for Roy. He soon was cast as Mr. Sin in the “Doctor Who” TV series and in movies “Flash Gordon” and “The Dark Crystal.”

“Frank Oz is a great, great guy. I worked with him on ‘The Dark Crystal’ and ‘Star Wars,’” says Roy.

After “The Dark Crystal,” Roy appeared as band member Droopy McCool in “Star Wars: Episode VI – Return of the Jedi” and performed full-length shots of Yoda in the swamps of Dagaobah. Although he was initially too tall to portray a walking Yoda, the challenge was solved by having Roy walk on his knees with the help of a set of knee pads. “I also worked inside the tail of Jabba the Hutt,” says Roy. “There were about 10 to 12 people inside of Jabba The Hutt! In the third film, I also played an Ewok.”

The Tim Burton Projects
In 1988, Roy moved to Los Angeles. He continued as a working actor in the movies “Under the Hula Moon,” “Mafia!” “How the Grinch Stole Christmas” and “The X-Files.” Legendary make-up master Rick Baker first introduced Roy to director Tim Burton. The 2001 film “Planet of the Apes” would be the first of Roy’s many films with Burton. 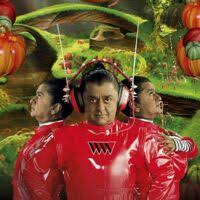 During filming of “The Planet of the Apes,” the director thought Roy, who was in full costume and make-up, was a child. Burton was surprised to discover Roy was an adult who had just turned in a great performance under all that costuming and make-up.

There was a shooting mix-up during Roy’s time on “The X-Files” that led to a deeper bonding moment with Burton. “They screwed up their shooting schedule,” says Roy of “The X-Files.” “But I made it work. At nighttime, I’d go work on ‘The X-Files’ and in the day I’d go work on ‘Planet of the Apes.’ For four days I never slept. Tim (Burton) was so nice to me.” The director pulled Roy aside and encouraged him to take care of himself. The duo really hit it off in what was to be the first of their four films together.

Burton and Roy almost immediately worked together again on the real-life/fantasy film “Big Fish” in 2003. “We were filming in Montgomery, Alabama,” says Roy of his ‘Big Fish’ character Mr. Soggybottom, part of a circus group. “Tim said, ‘You’re not a clown, actually you’re a lawyer and Danny DeVito is your boss. Wherever he goes, you go with him.’” DeVito memorably played Amos Calloway, the circus ringleader and manager. The role allowed Roy to shine as a different kind of character that was a loyal and important part of a circus business.

Almost immediately after “Big Fish,” Burton came calling again, wanting Roy for a pivotal role in the 2005 film “Charlie and the Chocolate Factory.” Roy was cast as an Oompa Loompa. It was a role that required as much time as it did attention to detail. The two met up to discuss the project at a Santa Monica hotel. Roy and Burton discussed the role of the Oompa Loompa and Burton explained that the role was actually four Oompa Loompas, and then it turned into seven, and then the role took on a life of its own.

Once he was cast, Roy traveled to London to begin doing work in his Oompa Loompa role. “Tim said, ‘We brought in the kids,’” explains Roy of the children who were going to dance with Roy while they wore masks. “They were phenomenal dancers, and they were all from India. They were brought in from a drama school. Tim asked, ‘What do you think?’ I said, ‘It’s not going to work. If you put masks on them, they are going to be looking down for their marks, and what about school?’ Tim said, ‘You’re right. Now what?’ I said, ‘I’ll do it myself.’ He looks at me and said, ‘That’s what I was looking for!’”

Burton did a camera test with Roy and explained how the Oompa Loompas were almost like an army. Roy shot seven performances to one song and then added seven more performances. Burton called Roy over to show him the result. “Tim said, ‘What do you think?’ I said, ‘You’re the boss what do you think?’ And Tim said, ‘I love it!’” In total, Roy portrayed a total 165 Oompa Loompas. He had a choreographer a nutritionist, a trainer, Pilates teacher, an assistant and a driver. “They really looked after me,” recalls Roy.

“Charlie and the Chocolate Factory” was an incredible experience. He wound up performing in four different musical numbers and in the process also learned to play drums, portrayed several unique characters, and even got to meet film composer and frequent Tim Burton collaborator, Danny Elfman. Roy had a few lines in the film, too. “Not only is Tim a good friend, he’s a great director,” says Roy who also voiced General Bonesapart in Burton’s “Corpse Bride.”

Out of this World 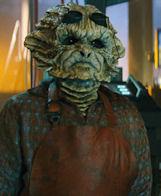 After “Corpse Bride,” Roy went to space as the character Keenser in the latest “Star Trek” movie series, and quickly became part of the on-set “family” with the rest of the cast. “I knew Tony Harper, the production manager on the first ‘Star Trek’ and I got to meet J.J. Abrams on that set,” he explains. “And soon they called me back to the set again. My agent said they created another scene for me.” Abrams decided to make Keenser one of the main crew members. Roy enjoyed working with the entire cast – especially Simon Pegg. “Simon said to me, you’re the only actor who has done ‘Star Wars,’ ‘Star Trek’ and ‘Dr. Who.’”

Roy continues, “We were one big family. And there are other stories I want to tell from our time in Dubai. Simon doesn’t drink, but the rest of us did, and we partied like crazy.” The rest of Roy’s “Star Trek” stories will be left to the readers’ imaginations.

“Deep into Life”
Roy is a food and wine connoisseur and loves to travel. His next venture will be a show called “Deep into Life.” It will be a travel show where he highlights cuisine from cities around the world. “I love wine and food,” Roy said. “We’ve already shot a few episodes.” They filmed in São Paolo, Buenos Aires and Rome, so far. “I want to meet chefs, see how they prepare dishes, learn about the ingredients and learn about the wines that go with those dishes.”

He also has an animation project that he is working on, and grass will not be growing under Roy’s feet. He says, “I just want to do my own show rather than episodic television. That doesn’t interest me.”

Roy’s attitude of gratitude consistently shines everywhere he goes, whether it is on a movie set or during an interview. His humble nature and outgoing approach are a breath of fresh air in an industry that can sometimes be known for its uncaring attitude.

“I’ve been fortunate enough to live in nice places,” says Roy. “Life has been great. It’s been amazing so far.” 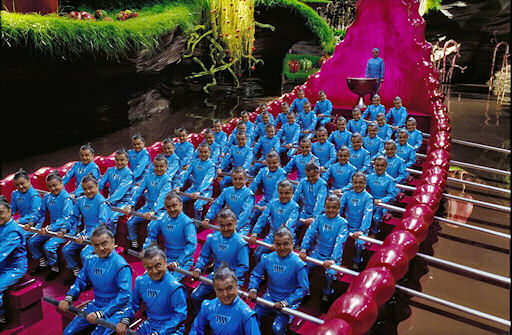 For more information on Deep Roy and his upcoming projects, visit http://bit.ly/DeepRoyIMDb.