Radiating a feeling similar to Steve Martin’s “The Jerk,” the story starts with a road trip, a mission to improve relations with the USA by bestowing a gift, a monkey, as it turns out. Funny enough, but when Borat’s abandoned daughter Sandra Jessica Parker Sagdiyev bounces into the scene the film moves to an entirely different level. Played by Maria Bakalova, her spectacular performance would steal the show from anybody save SBC himself, and nobody steals the show from Mr. Cohen.

Sandra becomes the tool for everything bad about Western society from broken families and gender stereotypes to the trafficking of sex slaves and the dreading of saber-toothed vaginas. A “Daughter Manual” is introduced that helps keep track of the myriad skewerings that an Olympian team of 10 screen writers trot through the fever dream script. When the intended gift, a monkey, is eaten by Sandra while both are nailed into a shipping box, Borat makes her the gift. A series of pitch perfect potty plots places her at the feet of President Trump, Vice President Pence and, finally, Rudy Giuliani as the film makers tick the victims off the list.

Apparently, the Giuliani interview is real, not some archival computer graphic. Why he would have ever agreed to an interview with SBC is one of the mysteries of this movie. There are others.

Jason Woliner is credited as director although it must be impossible to direct Cohen. Whoever directed whom, Irena Novak and Cohen emerge fully formed as one of the most polished comedy teams seen in recent history. While the film-makers work like demons to create a series of skits of such overt political incorrectness, brutal taboo-bashing tastelessness and simple unabashed offensiveness the two actors write their own body language and treatment, doubling down on every moral flaw conceived by modern man. They take the outrageous, transform it into the unbelievable and then make the viewer believe it.

If Cohen’s previous Borat film was a light expose suggesting in comedic terms what Americans really look like in foreign countries, this is a pointed political diatribe that dares you to laugh at it. Laughing at it anyway, we cannot believe either what we just saw or our reaction to it. Although the production values are high the cinematography is simple, more of a photographed vaudeville act than a Hollywood production. The formatting of the movie, and the nearly total lack of either credit or background for outstanding co-star Ms. Novak make fun of the concept of film itself. They know we will watch it and forget it, but they make that awfully hard to do. 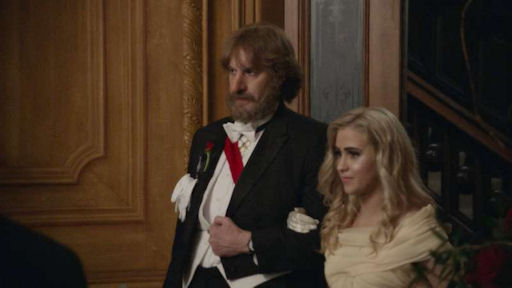