Exclusive: On the Set of ‘Rock Jocks’ 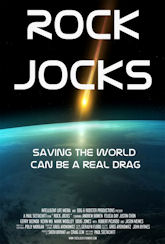 Here’s a synopsis of “Rock Jocks” to familiarize you with the movie before heading into the interviews: “A secret band of overworked government employees spend their night shift fighting off boredom and a meddling bureaucrat hell-bent on shutting them down, while defending the world from an onslaught of asteroids. Rock Jocks is an honest, edgy and quirky comedy that offers an unorthodox glimpse into the universal truths that arise out of the basic human condition.”

I had the chance to visit the set this week to sit down with Paul V. Seetachitt and Doug Jones during a break in filming to ask them a few questions about the project, and their involvement.

It’s Just Movies: Paul, you wrote and are directing “Rock Jocks.” Are you happy about taking on this dual role?

Paul Seetachitt: Yes and no. It is great to have control over something that you have created, but at the same time it can be hard to be objective when shooting a scene because you created it in your mind and you may not always see that maybe things need to be changed or rearranged to make that scene better. You definitely have to take a step back and look at the whole project objectively.

IJM: How did you come up with the idea for “Rock Jocks?”

PS: Well, I used to be an aerospace engineer and I started to think about the work environment and how productivity had a lot to do with the morale on the job. I took a look at people who may average 10 minutes of hard work per hour and thought this is true of every job, and it can be quite funny to see the conflicts that could arise from people having different work ethics, especially when it’s your job to save the world on a daily basis.

IJM: Did you always envision “Rock Jocks” as a comedy; it sounds as though you could have gone the dramatic route dealing with possible end-of-the-world scenarios?

PS: No, I always knew it should be a comedy, it was my life that I lived and saw the comedy in the work situations.

IJM: Who do you think will be most excited for this film?

PS: While everyone can relate to the work and responsibilities aspect of it, there is also some great comedy and then the cast that we have is spectacular. Each of our main cast members has their own following, so we are definitely targeting those and we strive to make the fans happy by shooting the actors’ strengths so we get the best possible performance out of each of them. We also have internet and YouTube star Kevin Wu, so it will be interesting to see if internet celebrity can transition into box office success.

IJM: How do you see “Rock Jocks” being released, and are you shooting for a full theatrical run and when can we expect it to come out?

PS: Yes, we are hoping for theatrical release, as of now there is no release date set, just sometime in 2012, but still being in production it is hard to say. Since this is an independently-financed movie, we don’t have the guarantee of that. Being released on DVD is always a back-up and then there is the possibilities to garner some attention at the many film festivals that happen each year. Look at Kevin Smith and what he is doing for “Red State.” He is selling tickets to his tour to help pay for the film and maybe get some positive attention about the film. This early on it is really hard to say what will happen. 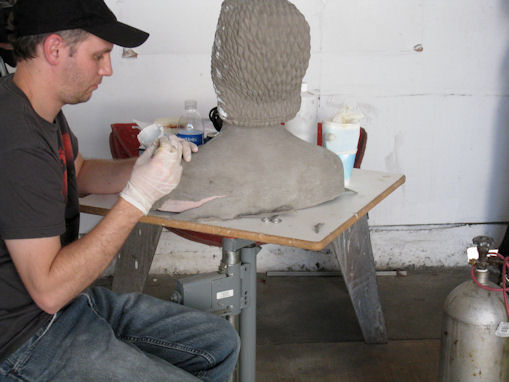 After my visit with the director, I got a chance to speak with Mr. Doug Jones himself, still in full make-up, taking a quick lunch break between scenes. For now all details on the look of his character are under wraps, so sorry no spoilers on how he looks.

IJM: How did you learn about “Rock Jocks” and what can you tell us about your character?

Doug Jones: I first heard about it from the executive producer Greg Aronowitz who brought it to my attention. I’m playing an alien commonly referred to as “Smoking Jesus” who is always popping up in the film. I came to this planet and then liked it so much I decided to stay. I am part of the A.M.I. (Asteroid Management Initiative) which is a Department of Defense program designed to intersect dangerous asteroids on a collision course with Earth.

IJM: Compared to other characters you have played, how is the make-up and prosthetic application for this role?

DJ: Well this is far easier than others I have done; this transformation only takes two hours to apply the prosthetics, make up and sclera lenses and one hour of removal time.

IJM: How do you come up with the movements and voices for each character you play? Does seeing yourself in full costume and make-up help you to develop that characters voice?

DJ: Each time I play a different character I have to be a chameleon and find that right voice that goes with it. Sometimes, seeing myself in the costume and moving around in it really does help create the sound. On “Hellboy II: The Golden Army” when I played the Angel of Death, I had these huge false teeth, it was hard to speak at all. So I used that and came up with the whispering voice.

IJM: Did you know any of the other cast members before starting on “Rock Jocks?”

DJ: Well, Felicia Day found me on Twitter and we have worked together on “Dragon Age Redemption.” I have also met Jason Mewes on the convention circuits that we have both been a part of.

IJM: You have worked on big budget movies, shorts and smaller films; do you have a preference on which kind to work on?

DJ: Well, each type is a different machine and it really matters on the director as well. I really enjoy Paul and his vision and am delighted to be a part of this film. Working on independent films is easier in the sense that you don’t have a studio interjecting their thoughts about how it should look and you can focus on the singular vision of the writer and director and in this case it’s the same guy. So that makes working on “Rock Jocks” easier and more fun. This film in particular is so light-hearted and fun, there is always laughing and joking with the cast that we have.

IJM: If you had to categorize or explain this movie to people, how would you?

DJ: I will say it’s a mixture of the hit show “Firefly” meets “Clerks.” Outrageously funny while using the dramatic sci-fi element as well, this movie is made for the funny while also focusing on responsibility, and the protection of the planet as well. This film will be very fun for gamers with a broad appeal to people in their late teens to people in their fifties. I am 50 and I would go to see this film and really enjoy it.

IJM: Lastly, as a fan of the “Hellboy” franchise what’s the word on the possibility of a “Hellboy 3” movie being made anytime soon?

DJ: With Guillermo Del Toro has been busy working on “The Hobbit” so there is no plan in the foreseeable future and I was told not to hold my breath waiting for it.

After the lunch break was over and it was back to shooting, I had a quick look around the different sets and got to see the Control Room where the A.M.I. pilots get to defend the Earth from impending rogue asteroids. I don’t want to spoil the surprise, so I won’t go into details on the look of the set, but I will say it looks exactly how you would imagine it should be.

As they ran through the next shot and I was able to witness Mr. Jones do what he does best, it was a thrill to see this gentle giant transform into this quirky alien and watch the fluid motions as he moved and subtle nuances that help breathe life into this new character.

“Rock Jocks” is still in production, but you can stay up to date on everything relating to the film in a number of ways: 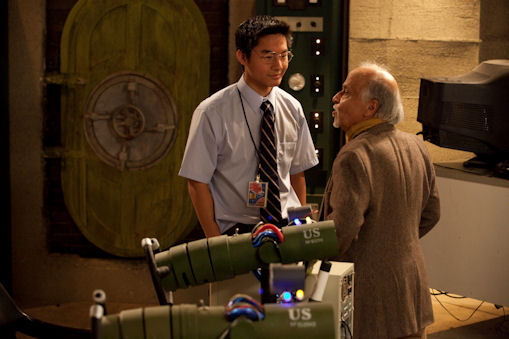