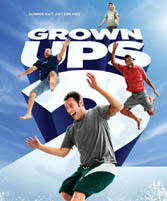 The gang is back together again and this time it’s not just for a long holiday weekend. Lenny (Adam Sandler) and Roxanne (Salma Hayek) Feder have decided to leave the big city life in Los Angeles and relocate to a small town in “Grown Ups 2.”

The majority of the original cast (including Chris Rock, Kevin James, David Spade, Maria Bello and Maya Rudolph) return for the sequel and this marks Adam Sandler’s first starring role in a sequel — though he did make a cameo appearance in “Deuce Bigelow: European Gigolo.”

The trailer starts off with some footage from the first film and the unforgettable July 4 weekend they spent in memory of their high school coach. We are then introduced to the small town life that Lenny grew up with and the boys go down memory lane by revisiting their summer swimming hole — which is now “Alpha Eta Sigma property.”

The teaser trailer makes the movie look like your typical Adam Sandler film and for the most part I’m generally a big fan, but his movies have been a hit or a miss proposition in the past few years. “Grown Ups” was funny, but was it good enough for a sequel? Let us know in the comments.