Tom Hiddleston finds himself in the middle of a very bad year in “High-Rise,” Ben Wheatley’s pot boiler about a social crucible in melt down. This should not be a huge surprise after his high tension “Kill List” and “Sightseers.” If anything, this movie continues the director’s explorations into the psycho-social foundations of violence; how the best laid plans can go awry. Unfortunately, the screenplay gets as crazy as the people. Maybe that is the point. 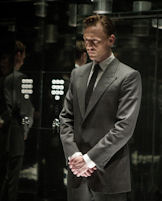 The setting is the state-of-the-art skyscraper dream of architect Anthony Royal (played to the hilt by Jeremy Irons). Irons does a fantastic job taking his previous dark knight characters and morphing them into the more cerebral, but no less lethal, role of the technician turned social experimenter. Frankenstein’s fingerprints are all over this one.

The skyscraper is populated by a cross section of the economic ladder, with the working class on the bottom floors and the wealthier on the top floors. Anybody who saw Fritz Lang’s “Metropolis” knows where this idea is going, and they are not disappointed. There are more social barbs than on a porcupine at a coming out party as the rich react as hilariously as possible. As the lower floors are bashing down the doors of the building, the resounding accord from the penthouse is, “This is a mandate. We must show them we can have better parties!”

If the intent is to show that an isolated “man as an island” life drives people insane, the screenplay does not further this goal by depicting nearly everybody in the building as insane from the start. Better would have been to start with Andy Griffith’s Mayberry and end up with “Clockwork Orange” instead of starting with “Orange” and ending up with “Mad Max.”

As the architects dream begins to crumble from the sheer weight of its technocracy, the people inside begin to lose what little of their social skills they had to begin with. Among them all, Hiddleston, playing Dr. Robert Laing, stands out. He maintains a remarkably even keel in spite of being subjected to every brutal, bullying cuff imaginable. Laing is also a technologist, kicking of the film by dissecting the skull of a schizophrenic to find out what makes the man tick. Later on he finds out what really makes people crazy, but, by then, it’s too late. Abandoned by society, the tower sits, its remaining sparse population eating dogs, while an identical tower is being built next door.

If history repeats itself, we may be in for a bad time in the next few decades. The rich are richer, the poor poorer and the walls may not hold forever. The concrete and steel structure is the metaphor for the social structure we take for granted. Without getting too far into these weeds, the cinematography and sound track both rate 9 out of 10 on the post-apocalyptic scale. Lenser Laurie Rose reunites with Wheatley after “Kill List” and “Sightseers” (as does screenwriter Amy Jump) and brings the garbage strewn wreckage of the New Age dream to you in living color. Composer Clint Mansell brings his “Requiem for a Dream” and “Black Swan” impending doom chops to bear on this flick like a pit bull on crack. And Elizabeth Moss and Luke Evans offer great performances as the only two sane people in the building.

Check out this tightly wound cautionary tale and find out who makes it, and who does not. 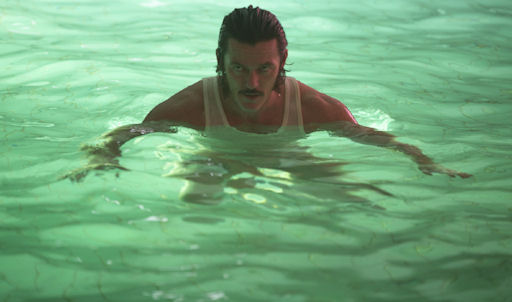