Golden Globe-nominated Jonathan Pryce takes the lead in “Dough,” an easygoing sit-com about immigrant life in the big city. 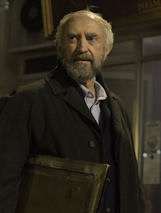 Nat Dayan (Pryce) owns and operates the kosher bakery Dayan and Son, which he started with his father in 1947 in London’s East End. Against all odds, he keeps the tiny bakery open, competing against the Cotton supermarket next door. He arises at 4 a.m. every morning and goes through his traditional washing ritual as he has for some 60 years. Every day, he denies the obvious — his bakery is from another time and serves long-lost customers.

When his most recent apprentice quits to join his overwhelming competitor next door, Nat is on the verge of a breakdown. He has tied his honor to keeping the store open. As he frets and fumes, his Sudanese cleaning woman volunteers her son Ayyash (Jerome Holder) for the job. Hiring a Muslim apprentice is the farthest thing from Nat’s mind, but he has no choice. In the end, Nat succeeds in keeping the store “in the family,” and Ayyash barely escapes jail and a life of crime.

Although the film has some genuinely funny moments, it is a serious statement about serious issues. Lurking behind Ayyash’s narrow escape into legitimate society are the stories of a thousand like him who are not as lucky. On one level, the film is a critique of immigration policies and, specifically, the options young immigrants have in their new-found western homes.

Director John Goldschmidt and co-writers Jonathan Benson and Jez Freedman try to work in a few pratfalls and inject some childhood into Ayyash’s persona, but, by and large, these fail. They fail because they are not up to the pain and beauty of the stories of the two protagonists.

The concept of Ayyash accidentally spilling pot into the dough and igniting a flurry of demand for the bakery’s goods is a stretch. Kids, definitely do not try this at home. Although the scenes of the neighborhood’s elders getting high are funny enough, there are no scenes of the trauma and psychosis that any psychotropic drug can bring on for an already marginally mentally stable person.

By the time the audience has overlooked that, plus the lame pratfalls, plus the phony viciousness of next door businessman Sam Cotton (nice try but no cigar for Philip Davis), there is not a lot more to hang onto to except the happy ending. In fact, that may be more of a dream than anything resembling reality.

If the film is escapist, its only saving grace are the stories of Nat and Ayyash, and especially Ayyash’s hard working mother who is the hero of the story. She is the only one who copes with reality and does something to make things better.

Ian Hart and Pauline Collins (who threatens to go to Florida, where “old Jews” go to die) pitch in with good supporting roles, but the mash-up catches up with everyone in the end. Better things to come for all concerned.