Mother Superior calls Ida to her office. Ida is informed that she must visit her mother’s sister before she takes her final vows. Ida didn’t know she had any relatives, much less an aunt.

Ida had been left with a priest who had placed her as an infant at the convent before her memory began. At 18 she sleeps with a picture of Jesus clasped to her heart, as Christ Himself holds his own hand to his glowing chest. 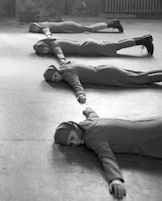 Ida does not know life outside the gray, bleak walls of the Catholic convent. The black and white cinematography with frigid snow scenes parallels the mute convent community that prays, works and eats in silence.

Then she meets Aunt Wanda, a judge with a perfunctory personality, promiscuous appetite for men and grief-stricken past. The first thing Ida asks is why her aunt allowed her to be brought up as an orphan in a convent. Wanda frankly tells her she didn’t want her. Then, she adds off-handedly that Ida was born a Jew.

At some point, the sophisticated, chain-smoking, alcoholic Judge Wanda asks the innocent Catholic novitiate something like this: “How can you make an honest choice to take your vows if you don’t know what life outside is like?Where is the sacrifice?”

Writer/Director Pawel Pawlikowski, educated at Oxford, is a brilliant, sensitive storyteller. “Ida” takes place in rural Poland in 1962, where Ida is a devout Catholic. The film’s black and white coloring corresponds to the life’s extremes, perhaps equally as bleak, juxtaposed in this award-winning, highly regarded film.

Life is typified with two distinct paths. The secular world has its music, clubs and dancing as well as its indulgences in alcoholism, passion, smoking and cruelty. Ida’s insular, protected convent has a spiritual life of prayer and devotion in regulated silence withlittle risk or variation.

Which life will Ida choose? What life would you choose?

Many of you have to admit that there are aspects of the monastic life that are appealing. You are part of a community devoted to prayer and taking care of each other. Outside of societal pressures, work demands and romantic challenges, you might be insulated in an idyllic cocoon of idealism, solid commitment and positivity.

As her visit with her aunt marches forward, both Ida and Wanda learn what became of their family during WWII. How they each decide to process and react to this information leads to the transfixing denouement of Pawlikowski’s masterpiece.

The writer/director examines life, the role of religious commitment and choices. What corrupts life? What corrupts people? Are there ways to truly escape our own corrupt nature?

“Ida” was screened at the 2014 Seattle International Film Festival on May 16 and May 21, 2014. Critics are hailing it as a must-see and I don’t disagree. It is a beautiful, intelligent, tender examination of life and choice.