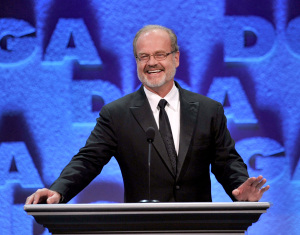 Director/actor/producer Kelsey Grammer will host the 65th Annual DGA Awards on Feb. 2, 2013. in the Ray Dolby Ballroom at Hollywood & Highland in Los Angeles.

Grammer, who starred for two seasons on the critically acclaimed “Boss,” became a DGA member in 1996 and was himself nominated for a DGA Award for outstanding directing in a Comedy Series for the “Merry Christmas, Mrs. Moskowitz” episode of “Frasier.”

“We’re so pleased to welcome Kelsey Grammer back as host of the DGA Awards for the second year in a row,” said Directors Guild of America President Taylor Hackford. “Last year, Kelsey kept the show (and the wine) flowing while both celebrating the craft of directing and poking fun in all the right places. The audience had a rousing good time and I know we are all looking forward to seeing what Kelsey comes up with this year.”

In addition to directing nearly 40 episodes of “Frasier,” Grammer’s other directing credits include “Everybody Hates Chris”; “Out of Practice”; “My Ex Life”; “Alligator Point”; and “Hank.”

DGA Awards Dinner Chair Michael Stevens said, “Kelsey is the consummate entertainer – between his sharp wit and archly-raised eyebrow, and his long history in this community on both sides of the camera, the show promises to be just as lively and irreverent as ever.”

Grammer most recently voiced the character of the Tin Man in “Dorothy of Oz” and just finished acting in the feature film “Reach Me.” Both are slated for 2013.

This will be Grammer’s second consecutive turn hosting the DGA Awards.