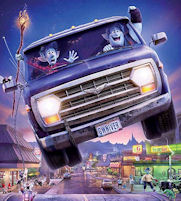 Last year came with some really great animation movies, which included “Frozen 2,” “How to Train Your Dragon: The Hidden World,” “The Addams Family,” “Toy Story 4” and many others. However, 2020 promises to be even better.

We will get to see a few original animation films from Netflix and Sony Pictures, as well as Disney and Pixar. Below, we are sharing with you some of the most-anticipated animation movies that are coming to us this 2020.

And remember, you can always play your favorite best mobile casino games as you watch these films.

Onward
This movie will be on our screens starting March 6 and will introduce us to two elf brothers (voiced by Tom Holland and Chris Pratt). The two brothers lost their father when they were very young and you should find this adventure to be really touching.

Extinct
We don’t have the exact date when this film will be released but we do know that it’s coming out during the first quarter of the year. In the film, we will get to see some donut-shaped animals, which are called Flummels. We get to see all the action and adventure as they travel back into time so that they can save their kind from extinction.

Trolls World Tour
This movie will be coming to us on April 17 of this year. It’s a sequel to the 2016 release “Troll” and promises to offer more entertainment. We will get to see some new Troll tribes and each of these tribes is dedicated to a certain musical genre. You will definitely be treated to some great music in this movie.

Scoob!
This film will be released on May 15. In the film, we will get to see the origin story of the Great Dane. Not only that, but we will also get to travel around the world in this epic adventure. Did you know that you can bet on the other categories like movies nba basketball betting and many more.

The SpongeBob Movie: It’s a Wonderful Sponge
Coming to us on May 22 is this movie, which will introduce us to the origin tale for SpongeBob. We will also get to see the characters enter into live-action worlds.