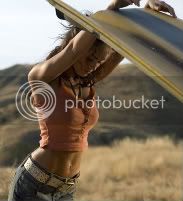 Entertainment Weekly reports today that Megan Fox will not appear in “Transformers 3,” slated for release July 1, 2011. According to multiple reports, the ultimate decision rested with “Transformers 3” director Michael Bay.

On one level, this is fairly shocking news; while not the most prominent [human] face of the first two films, Fox was a significant part of their allure — especially among the franchise’s young male target demographic.

On another level, it’s not at all shocking. Last year, in a promotional interview for “Jennifer’s Body,” Fox compared Bay to Adolph Hitler. She didn’t stop there, either. In that interview, with industry magazine Wonderland, the young actress also characterized Bay as mad man who’s “a nightmare to work for.”

Bay, who’s known for a larger-than-life personality, was surprisingly measured in his response. Upon the announcement of “Transformers 3” last October on his website, he responded to Fox with a P.S. note wherein he sounded as if he were addressing a petulant child. He made it fairly clear, however, that he looked forward to working with Fox again.

That was followed by a letter posted to Bay’s website by three crewmembers who’d worked with Bay for over 10 years, including on both “Transformers” films. To call that letter — which you can read here — unflattering to Fox is like calling a category 3 hurricane a thunderstorm; it’s an unmitigated jaw dropper.

Bay quickly had the letter removed and responded with the following missive: “I don’t condone the crew letter to Megan. And I don’t condone Megan’s outlandish quotes. But her crazy quips are part of her crazy charm. The fact of the matter I still love working with her, and I know we still get along. I even expect more crazy quotes from her on ‘Transformers 3.'”

Fox’s camp went into damage control, publishing a letter from a production assistant who worked with Fox on both “Transformers” films. That letter — which you can read here — made Fox sound worthy of a Nobel Peace Prize.

Never one to miss the opportunity for a salacious quote (or to know when to quit, apparently), just this week, in an interview with Allure magazine, Fox blamed Bay for driving her to sunbath incessantly for the first two “Transformers” films. Allegedly, Fox contended, she’d spent every spare moment in the sun so Bay would be “happy with her skin tone.” “It’s not going to happen again,” she was quoted as saying, “because of the damage and the possible skin cancer.”

Regarding Fox’s on-set demeanor and personality, I’ve little doubt the truth is somewhere in between. Her comparison of Bay to Hitler, however, is way off base. Then again, by all accounts, Fox is no Rhodes Scholar and probably didn’t completely understand the implications of that comparison.

I wonder if she understands now. This news probably isn’t the end of her career, but it’s certainly a blow. Will other studios and directors take note and label her as difficult to work with? That seems a real danger. In her favor, Fox hasn’t had run-ins with law enforcement. And beyond this war of words, she doesn’t have a reputation for bad on-set behavior or being difficult to work with, either. So there’s that.

What it boils down to, then, is this: words matter. That’s a lesson Ms. Fox obviously didn’t learn during her participation in 2008’s “How to Win Friends and Alienate People.” Someone in her camp needs to inform her that no one — neither in front of nor behind the camera — is irreplaceable. The people we see on TV and movie screens don’t get there merely by hard work or because they’re just so wonderful. Obviously, hard work plays a role (and luck as well), but there’s also a multitude of people behind the scenes that help every successful actor get where they are. And, with the exception of a handful of Hollywood’s truly elite, there’s always someone more powerful (in this case Bay) who can sabotage that success.

It’s hard not to feel bad for the 24-year-old Fox. In this war of words with Bay, it would seem the influential director has gotten the last word — and the most decisive one. One can only hope she learns from the experience and is more mindful in the future of who she compares to Hitler.

Tags: "Transformers", Megan Fox, Michael Bay
Posted 19 May 2010 by Other Writers in News