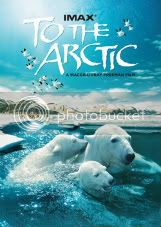 An extraordinary journey to the top of the world, “To The Arctic” 3D is the ultimate tale of survival. The film takes audiences on a never-before-experienced journey into the lives of a mother polar bear and her two seven-month- old cubs as they navigate the changing Arctic wilderness they call home. Captivating, adventurous and intimate footage brings moviegoers up close and personal with this family’s struggle to survive in a frigid environment of melting ice, immense glaciers, spectacular waterfalls and majestic snow-bound peaks.

“’To The Arctic’ was filmed entirely in 15/70mm with spectacular shots designed to take full advantage of the IMAX 3D format, and the story and setting will be made even more powerful by Meryl Streep’s unmatched artistry,” said Greg MacGillivray, director of “To The Arctic” and president of MacGillivray Freeman Films. “This is MacGillivray Freeman’s third collaboration with Meryl, and we are delighted to pair her prodigious talents with this emotional story of family and hope.”

Dan Fellman, president of Domestic Distribution for Warner Bros. Pictures, stated, “Together with IMAX, we have transported audiences from the reaches of space to the depths of the ocean and, most recently, into the untamed jungle. We are thrilled to partner with IMAX and MacGillivray Freeman Films to tell an important story about a vanishing landscape and the animals that count on it for their survival.”

“The most enduring relationship is that between a mother and child, which is powerfully portrayed through the polar bear family in To The Arctic,” added Greg Foster, chairman and president of IMAX Filmed Entertainment. “Greg MacGillivray’s engaging storytelling combined with the strength of the Warner Bros. and IMAX partnership will deliver for audiences an inspiring glimpse into how the ties between family prevail above all else.”

About “To The Arctic” 3D
“To The Arctic” 3D is an IMAX, MacGillivray Freeman Films and Warner Bros. Pictures co-production and a presentation of One World One Ocean (www.oneworldoneocean.org). The film was produced in association with Campion Foundation, Reynders, McVeigh Capital Management, Canadian Museum of Civilization and MacGillivray Freeman Films Educational Foundation. “To The Arctic” was shot by Greg MacGillivray, Brad Ohlund, Bob Cranston, Howard Hall, Ron Goodman and Jack Tankard, produced by Shaun MacGillivray, written by Stephen Judson and executive produced by Tom Campion, Chat Reynders and Harrison Smith. The film’s companion book, “To The Arctic,” featuring photography by wildlife photographer Florian Schulz, is now available from Braided River, whose books combine photography and essays to raise awareness about some of the world’s last great wild places (www.welcometothearctic.org). More information about the film can be found at http://www.imax.com/tothearctic.