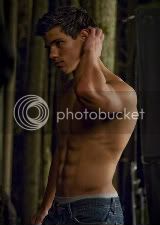 After watching this sneak peek, I’m really interested in seeing how they bring the wolves into the movie.

I’m curious, because in the book, “New Moon,” Edward (Robert Pattinson) isn’t in the entire story. And we’ll see if they made the right choice in casting Tyler Lautner as Jacob, which I’m still not completely sold on.

Also, by the looks of the sneak peek, bringing Chris Weitz aboard to direct looks like it was the right choice.