As you probably already know, director Ridley Scott is about to have a most-anticipated return to the genre he helped revolutionize when “Prometheus” opens in less than a month, on June 8.

We have been excited for this film since its announcement and speculating on is storyline — which has been partially filled in due to 20th Century Fox releasing multiple trailers, featurettes and the first clip from the film.

While we do know about the characters and basic plot, there are still many questions about the film that are left unanswered. Now we have a brand new poster that is not only action-packed but full of potential spoilers, so if you want to remain completely spoiler-free then read no further.

Here is what we know about the film so far: In 2058, an archeological dig reveals a startling truth about mankind and our origins, and our connections to an ancient alien race. The dig also reveals the location of the alien’s home planet and the Weyland Corporation sends out an exploratory vessel called Prometheus to make first contact. When the crew reaches the planet, they begin to investigate and discover truths about our past, the aliens and also the bio based technology they use. Will we get all of the answers we want and if not will we take them? One thing that’s for sure is either way we are going to have trouble. Whenever one far superior species comes into contact with a lesser one, total dominance and possible extinction is a major possibility. In searching for answers could we have possibly awaken a force that could destroy humanity and every living thing on Earth? 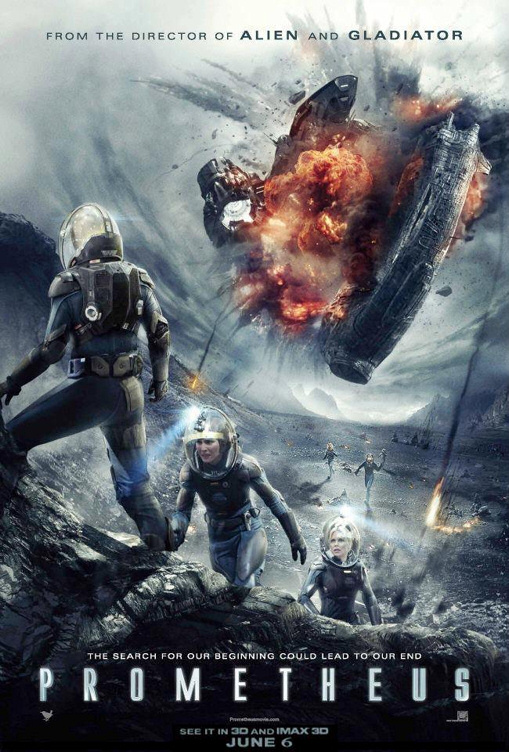 In creating a science fiction epic set in the most dangerous and uncharted corners of the universe, there is no way to know what to expect. This poster mirrors the epic explosive action we have seen in the trailers and fills us in on a few key points.

If this is a direct representation of a scene in the film, we know at least five — or possibly six — crew members are alive when this scene takes place. We have no idea when this scene takes place in the film, but I am assuming somewhere in the middle. We also can deduce that by the collision, and assuming destruction of Prometheus, the remaining crew will be stranded on a hostile alien planet with no way to get home. I also deduce from the distance between the three figures in the foreground and the two in the background that maybe they aren’t running away from the destruction together, but possibly being chased by them.

As for the workmanship of this poster, I am impressed with how the motif and feel of this poster. There is a major difference from the previously released posters, giving those who are reluctant to see the film a reason to do so, with promises of action, danger and more. I am a bit tired of the typical photo-shopped celebrity head on a body that is possibly not their own. Is it that hard to shoot some stills while the actors are on set or doing costume checks or promotional shoots? Besides that, and the fact that this made my anticipation grow knowing that this release is just around the corner, I am a fan of Ridley Scott’s and can’t wait to discover all the secrets “Prometheus” has to offer.