Featuring Alanis Morissette, this sci-fi film is centered on a good-natured young man in the ’80s who has a beautiful wife, a dedicated best friend, a job in the family record store and a seeming idyllic life. However, this is all disturbed one night when he wakes up to a vision of himself standing by the bed. His wife wakes, sees it too and is terrified. Their contrasting reactions set up a wider parallel. Some are curious and some are scared stiff. Some accept the call while others are too cowed to take a risk.

Writer/director/producer John Alan Simon consciously channeled the mind of prolific science-fiction writer Philip K. Dick to re-create this masterpiece novel as a suspenseful movie. The result is a film about what I’ll call the power or catalyst for inner drive, the essence of our inspiration and motivation. Dick called this source VALIS, an acronym for Vast Active Living Intelligence System.

Philip K. Dick’s VALIS trilogy (1981) technically didn’t include the posthumously published first novel called “Radio Free Albemuth.” This is sci-fi for the thinker and the autobiographical tome Simon decided to recreate with a faithful heart.

Like other Philip Dick spin-offs, “Minority Report” and “Blade Runner,” there is a foreboding conspiracy. But unlike its predecessors, “Radio Free Albemuth” focuses less on violence and negativity and more on the invincibility of the human struggle, the immortal, transcending power of art and the surviving message of good in a corrupt society.

While Alanis Morisette may draw the curious in, you will notice in the trailer that it is the transfixing work of the three leads and their relationship with each other that grip the audience. While it is known that Nick Brady (Jonathan Scarfe) and his best friend Phil (Shea Whigham of HBO’s “Boardwalk Empire”) are manifestations of Philip Dick’s own personality, I believe it’s possible that Rachel (Katheryn Winnick), who is scared to death of her husband’s aberrance, represents his more self-critical side.

Intellectually exciting, John Alan Simon has created a fascinating film as true as possible to PKD’s novel. While it may be an autobiographical play on Dick’s life, it will resonate with a thoughtful audience about the essence of man and the purpose of the universe.

A must-see movie, Radio Free Albemuth is available on all digital platforms during its theatrical run — including iTunes, Amazon, Time Warner OnDemand and for unlimited streaming on Yerka. 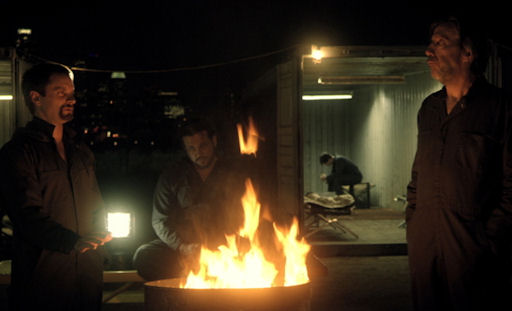