Review: A Most Violent Year

The story is set in New York City in 1981, in what we are told is the most violent year in the city’s history. Before we go any further, it should be noted that J.C. Chandor’s wonderfully transporting story is not a particularly violent one. His previous hit, “Margin Call,” was much more violent — at least emotionally violent — and his recent “All is Lost” is just a violent as is this movie. 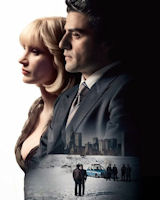 In fact, “A Most Violent Year” has much in common with “All is Lost.” This is a film of self-reliance and the strength of one’s convictions in the face of seemingly insurmountable odds. The power of this film is such that it has been compared to the work of Sidney Lumet, the master of the inner city drama. Like his films “The Verdict” and “Dog Day Afternoon, this is a story of personal strength and the winning of the game by inches, and an inch at a time.

Oscar Isaac and Jessica Chastain play Abel and Anna Morales. Emigrants to New York, they have a small but profitable business selling gasoline to filling stations. Abel has bigger plans, however, and the two are under the gun to come up with some serious cash. In the background, Anna’s family drifts in and out of the screenplay, a family with a rough reputation who could help Abel when the going gets rough. Abel, however, wants no part of that kind of help. He has to do it his way, or no way. And he is not going to become involved in any criminal dealings to make his dream reality.

Isaac was nominated for a best actor Oscar for his portrayal of the lead character in “Inside Llewyn Davis” last year. His work in this film is just as good as that and some people will say even better. The Oscar-nominated Chastain (“Zero Dark-Thirty” and “The Help”) has a smaller role than that of her on-screen husband, but she is pitch perfect. Her character, although in the background, has a solid 50 percent of the brains of the husband-wife team. She handles the bookkeeping for the operation and that can get very tricky.

Although their small gasoline business is sound and makes a fair profit, the two cut the same corners as their competitors. There is money skimmed here and there, gas is sold on the side, off the books, road taxes that are charged to the buyer but not completely paid to the state. The two do what it takes to survive. What they do not do, and will not do, is steal from their competitors and lie to anyone. Corners are curt, but a line is drawn, as well.

Cinematographer Bradford Young had a great year in 2014 with this film and the smash hit “Selma” adding strong creds to his already huge list of lenser accomplishments. He manages to imbue each shot with tension and just the right amount of scary apprehension, thoroughly capturing the danger of the dirty, greasy gasoline tanks and the trucks that carry the juice of the city to the farthest, darkest corners of Gotham.

Speaking of trucks, emerging actor Elyes Gabel does a fantastic job playing young and malleable truck driver Julian, who embodies the dark side of the American Dream. He is the inner city child who lacks the guts, brains and, most importantly, character that it takes to be a success. He lacks everything Abel has and even with the cards stacked very much against Abel, Abel is headed towards success as Julian seems headed for nothing but humiliation and failure. The big city giveth and the big city taketh away.

Chandor re-united with composer Alex Ebert after Ebert’s Oscar winner of a score for “All is Lost” to pen the soundtrack for this film. Mark another success for both parties as the soundtrack reverberates with the dark percussive notes of the trucks and dark industrial back-waters of the East River.

“A Most Violent Year” is a straight up piece of work by Chandor with solid performances and crew contributions throughout.