From the opening shot of Jennifer Aniston in Daniel Barnz’ simmering psycho-drama you know you are not watching “Friends” anymore. Aniston is made up to the hilt with the best prosthetics since Steve Carell’s nose in “Foxcatcher” and when it comes to the acting she is loaded for bear. 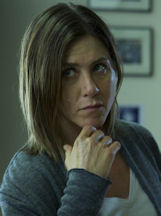 She plays Claire Bennett, a woman traumatized beyond belief by a devastating recent loss. It is to the credit of director Daniel Barnz and screenwriter Patrick Tobin that the reason for her trauma is not made immediately clear. The backstory emerges slowly and painfully throughout the film.

The audience is drawn into the mind of Claire as she tries to process what has happened to her and what she has to do to move on. Her portrayal of the severely emotionally damaged Claire is one of the nest pieces of work so far in 2015.

Claire has actually suffered two major losses when the story opens. The second loss, only a week or so past, is of one of her best friends who she met as part of a grieving therapy group. Nina Collins (Anna Kendrick) committed suicide in a particularly gory and undignified manner when she became ultimately unable to cope with her own psychological issues. Kendrick was nominated for a best supporting actress Oscar for her performance in the witty “Up in the Air” in 2009. She is every bit as good in this film as the ghost of the departed Nina.

Adriana Barraza plays Silvana, Claire’s Hispanic housekeeper and care-giver. Rounding out the hat trick of three great performances, she has a limited role in this film, which is too bad. Based on her 2007 best supporting actress Oscar nomination for her work in the smash hit “Babel,” she could have made a greater contribution.

Not that the film was lacking for outstanding acting work at any point. Aniston won a Golden Globe for best actress in the wildly popular “Friends” TV series in 2003. She was nominated for another Globe for best actress for her outstanding work in this film. Especially contrasted with her persona on “Friends” this role is something very different—acting that is as serious as a heart attack and yet conveyed with a wickedly incisive dark humor.

Sam Worthington plays Roy Collins, Nina’s husband and widower after her suicide. Claire finds relief and, eventually, a role model in Roy. As she gets to know him better the two flirt with a relationship with Nina’s ghost delivering a scathing condemnation of Claire in the background. As Claire starts to unravel these panic attacks and hallucinations become more and more powerful. The power of the writing, directing and acting is such that the viewer is drawn into Claire’s mind and she becomes unhinged. We take part in her growing addiction to pills, her inability to kill herself to end it (although she tries) and, worst of all, her failure to admit that she is the problem.

The fact is that Claire never cared for anyone but herself and the person she lost. That person was her salvation, her chance to finally do the right thing. With that lost, she felt she was doomed to being a bad person, so might as well get on with it. In the end, she finds that she has friends she never knew and she also finds that once she begins to care for other people she is able to care for herself.

In the superlative acting department it would not do to forget the brief but perfectly executed role of Leonard, played by William Macy. Although he has only about sixty seconds of screen time they may be the most intense, personal and heart felt sixty seconds in the entire film. He is absolutely at his best, even for that too short appearance. Of course, Aniston is the protagonist in the scene, as in the entire film, and she does not disappoint. Is it possible to develop screen chemistry in a minute?

Overall, “Cake” is a very good film with an amazing performance by Jennifer Aniston, showing a diversity of style we never knew she had.