Although “Blackhat” is a fun romp into a fantasy world of explicitly bloody, violent international espionage, director Michael Mann (written by Morgan Davis Foehl) has created a work of sound and fury that signifies nothing. 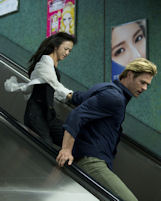 The film gets off to a good start with Nicholas Hathaway (Chris Hemsworth) being rousted out of his high security prison cell to answer a charge of hacking into the prison’s accounting system to add $900 to each prisoner’s bank account. He may be a punk but he is certainly a popular punk. Not only is he popular, but he is very good looking. Too good looking, in fact.

This is the first flaw in Mann’s action thriller. He has resurrected one of the characters from his old “Starsky and Hutch” or “Miami Vice” screenwriting days and anointed him as a computer genius. Nicholas has the computer skills of Bill Gates and Steve Jobs combined, multiplied by 10, and has thrown in the mental powers of Carrie and the killing skills of Hannibal Lector. This would have been a better film if Nick had been dressed up in a super-hero suit and belching nuclear fireballs.

At the heart of the unabashedly preposterous plot, a remote access tool (what else, a RAT) program has been unleashed on a nuclear power plant. As a result, the plant has nearly melted into the ground. A money trail leads to commodities speculating and the chase is on for Mr. Big. Avowedly unreformed punk Hathaway is sprung from the pokey to help out, extracting a promise of freedom from the US District Attorney because he is the only person in the world who can do the job. Computer nerd gets a Get-Out-Of-Jail-Free card, saves the world from RATs and is after Mr. Big with a screw driver or a smart phone, whichever is nearest to hand.

No, this film does not pass the geek test. Even at the packed, geek friendly pre-screening in Seattle there were too many moments when the audience simply broke out laughing when Hathaway downloaded a password from the Net or broke into NSA super-code like Tiger Woods hitting a golf ball. Of course, there were also moments of gasping surprise when director Mann teams up with Oscar-Emmy nominated cinematographer Stuart Dryburgh to lay some very explicit, blood-splattering, home do-it-yourselfer head splitting violence on the unsuspecting, nerd heavy viewing audience.

Viola Davis (“The Help” and “Doubt”) injects some real acting talent as FBI agent Carol Barrett. Agent Barrett confronts Hathaway in a great one-on-one screen rivalry / love hate confrontation that brings out the best in both characters. The film actually morphs into a strange kind of buddy flick, with Barrett parrying Hathaway’s psychically wonkish byte-isms with her own street smart FBI gang trivia. Unfortunately, two time Oscar nominee Davis is barking up the wrong tree trying to haul some rationality into this haywire screenplay.

Wei Tang does a good job playing Hathaway’s love interest Lien Chen. She is able to take an understated role and play it straight up in an understated way. Like Hathaway, the Chen character is able to break into a suspect’s computer and ferret out secrets after spending ten seconds in a blood-drenched crime scene. She should have had a stronger presence in this movie, but that was not to be. This is a teenage alpha-male film, the computer geek turned SEAL, and there is not much room for girl geeks, or girl SEALs.

Great walk into a hot, decaying, super-radioactive nuclear reactor to pull out the one server of a thousand that holds the key to the mystery. Advice from the screenplay, “If you get too hot, your core temperature will increase and you will pass out. Never mind the lethal radiation, your rubber coated jump suit shields all that out.” Plus, you get a great tan that never fades. You will never look at a pump PLC (no, it is not a Public Limited Company) in the same way again.