Review: A Play of Bullets: Ram-Leela

Having read the original Shakespearean version of “Romeo and Juliet” more than 100 times with my high school English students, who would think that a campy Indian rendition would break me down to tears? “A Play of Bullets: Ram-Leela” is Sanjay Leela Bhansali’s interpretation of Shakespeare’s classic teenage story of love, idealism and rebellion. But beware, Bhansali changes Shakespeare’s script in three surprising, important ways — and makes it better. 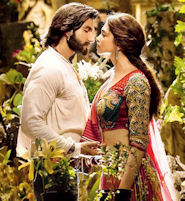 The first surprise is not so unexpected. Ram (Romeo) does not kiss Leela (Juliet). In the devoutly religious cultures of India, Bangladesh, Pakistan and Nepal, where this film finds its greatest potential audience, popular mainstream films with romantic themes have no smooching. How Bhansali later deals with the RJ elopement and honeymoon took some amount of cultural cleverness and delicate story re-writing.

The second deviation is delightfully ironic coming from a traditionally more repressed set of cultures than the west. Remember that the Montagues, Romeo’s family, and the Capulets, Juliet’s family, were ruled by despotic men who raged on and on without reason or cause except historical contempt?

In Bhansali’s rendition, the house of the Capulets is run by a ruthless woman who is even more power-hungry than the male head of the Montagues. Female power, from the land of the Devi goddess, is infused through all the female characters. [Why didn’t Bas Luhrman think of that in his version with Leonardo di Caprio and Claire Danes? If he could set his stage in Miami in current time with guns and hot rods – why didn’t Mrs. Capulet and Mrs. Montague have a little more clout?]

Leela (Juliet) will be the heir of this powerhouse and she has been trained appropriately. She is no Barbie. Though beautiful, she is independent and rebellious. She knows how to fight and is a marathon runner who has no trouble informing her heartless mother that she is already married to Ram. When she is confronted with marrying another man (known as Paris in the Shakespeare version) she will refuse and allow her mother to chop off a body part to prove her devotion to Ram.

As an aside, the director used his mother’s name, Leela, to honor his emboldened, loyal conception of Juliet.

The third deviation is that both Ram and Sheela are beset with numerous tests and challenges that prove there’s nothing more powerful in this world than True Love.
Oh, and the ending was a little different, too.

Adhering to the tone of the Shakespearean script, there is plenty of humor with verbal puns and tricks played by all. In addition, there is much dancing, singing, ridiculous feats of battle antics and unreasonable survival amidst deceit, greed and miscommunication.

Throughout the film there is the obvious theme of how valuable it is to get along despite our cultural differences. If we don’t we are doomed to self-destruction. Bhansali infuses a glorious inclusive message, irrespective of culture, beliefs, historical conflict or gender, that all people benefit when they respect each other and work together – and that’s just like Will. 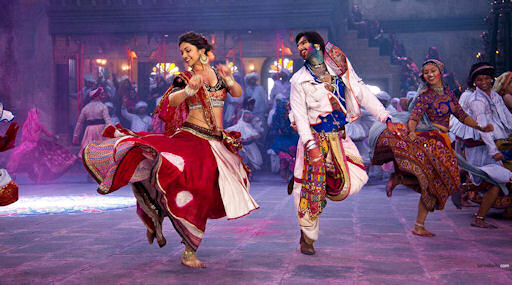