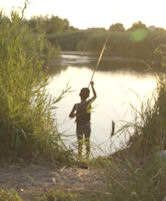 Every few months, weeks or days, many working Americans dream of life in the wild. The simplicity of nature offers the ultimate freedom, work we like when we like it, without modern backstabbing urban politics. Then we sober up. There were people here who lived like that a couple hundred years ago. Many of them died. It only took one mistake, one bad crop, one hungry animal. A stagecoach breakdown meant no part for the plow, no food for the winter.

In the Bucharest Delta, Romania, the Enache family did not have to go back to nature. They were nature. They lived in a wilderness with an infinite fish supply, at least as far as hand-fishing goes, so they had the food they needed. They lived in a small building that hardly qualified as a shack, an open framework of cast-off boards draped in scrap carpets, tarps and blankets. The nine children and two parents sleep together, a natural solution for warmth, shelter and safety.

After the first half of the movie shot in idyllic circumstances, the father exclaims, “I knew this would happen!” Earthquake, flood, wild boar, locusts, lions, tigers, bears? No, even worse, civilization. This was not a big surprise since the “wilderness” which had provided food, water, shelter, work and play was on the edge of Bucharest, a city of about two million covering almost a hundred square miles.

There goes the neighborhood.

Last year saw the showing of the fascinating documentary “Spaceship Earth” about Biosphere 2, a sealed geodesic structure supposedly enclosing a miniature earth eco-system. The Enache family did not build a dome to replicate nature, nature built their lives to replicate animals. This only works one way, completely in the wild, or not at all. The parents trained their children not only to fish for themselves, but to sell those fish to make money to buy clothes, a generator and other necessities. It was a life that was bound to end, and it does, in this movie.

The film echoes “Wolf Pack” of 2015 in which, apparently out of fear, the parents of the six Angulo brothers kept them locked in an apartment in New York City for over a decade. Eventually, the oldest find ways to sneak out of the apartment and integrate into society at large, whether the parents like it or not. The same thing happens in the Enache family. The kids are the first to smell the roses, or, rather, smell the pavement. Mom and Dad are not going to like it.

Radu Ciorniciuc’s debut feature had its world premiere at the 2020 Sundance Film Festival, winning a Special Jury Award for Cinematography. The first two parts of the movie, set in what would become a national park, are shot with an expertly wielded hand-held. The POV is waist or chest height to emphasize the trails, marsh grass, waterways and living areas that are the family’s home. The last part of the movie is shot with a tripod mounted camera aimed straight at face level to emphasize the restriction and rigidity of the city, and to bring out inner thoughts. The new house does not work any better than housing an eagle in a bird cage or a lion in a library. Girlfriends turn into mothers, play turns into jobs, police turn into, well, police. Fishing is, by the way, illegal.

Packed to the brim with vibrant human condition, the final scenes show the family trying to cope with their strange, new environment. A powerful documentary that begs a sequel in 10 years. 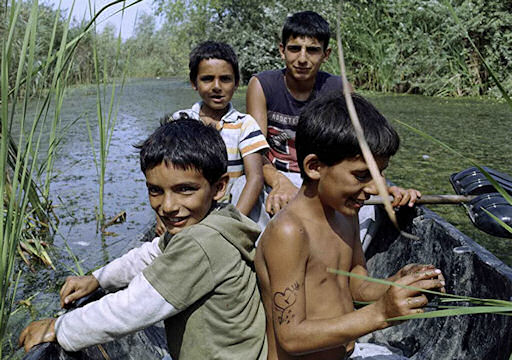