No, not that Atlantis. This is the Atlantis of the recent future. It is 2025, a year after a devastating war that bombed a nation back to the 19th century. War and capitalist greed have left water poisoned with chemicals, statesmanship poisoned with propaganda and humans poisoned with violence. Two men quit their shift at a ghostly steel plant, set up human silhouette targets in the frozen rocks and start rapid fire shooting with military pistols. As therapy is lacking, it is the best they can do.

Writer/director Valentyn Vasyanovych’s science fiction is more science than fiction. Ukraine’s submission for Best International Feature Film for the 2021 Oscars is thoroughly realistic, from the land mines to the decaying corpses. If slightly in the future, the future is now. The film begins and ends with infra-red night goggle shots, the war viewed from afar through an insulated medium by those who started and ran the war but do not participate in it. Returning from the war, shell shocked and as saturated with PTSD as a battlefield is saturated with blood, the two retired soldiers live in a daze.

The steel plant is closing, its iron cauldrons spewing toxic fumes and spilling their white hot innards onto the soil to smoke and grow cold. The crucible of war makes a few heroes but the majority are doomed to never leave that sulfurous stew. A voice comes from a huge screen, the plant is closing. Although the film’s dialogue is in Ukrainian, the voice is in English. Outside forces have created the war and outside forces control the aftermath.

The soldier Sergiy (strong work by Andriy Rymaruk) gets work driving a water truck, a vital task since clashes between government troops and pro-Russian separatists have left the land all but uninhabitable. Land mines are everywhere, rained down from airplanes and left to fester. “We try to destroy them when we can. It will take fifteen to twenty years at least.” Sergiy meets Katya (Liudmyla Bileka), a volunteer recovering bodies for proper burial. As Sergiy drives his water truck he finds solace in putting war’s dead to rest even as his nightmares make him wish for death.

The cinematography and editing, also by the director, are superb. The land is frozen, snow covered or a quagmire of mud. Present day feelings and conditions are juxtaposed with industrial infrastructure out of the nineteenth century. There is no money, survivors help each other when they can, hoping for some relief themselves. Life is starting over, from the barren, makeshift cemeteries to the abandoned rusty coffins of resource extraction.

As death hovers everywhere, rushed autopsies are performed and bodies are assigned numbers for burial. Covert killings outnumber deaths in battle and are so overwhelming as to be uncountable. They are as many and as hidden as the remaining landmines. In the iconic press photo for the movie, Sergiy takes a bath in the jaws of a mining front loader. He cleanses the sins of his country in the rusting nest of its former grandeur.

The silent soundtrack conveys the setting better than any sounds could. The blustering congratulations of the face on the big screen gives way to the silence of locked-in grief that will never be completely cleansed. Todays heroes may have survived one war only to find themselves in another. 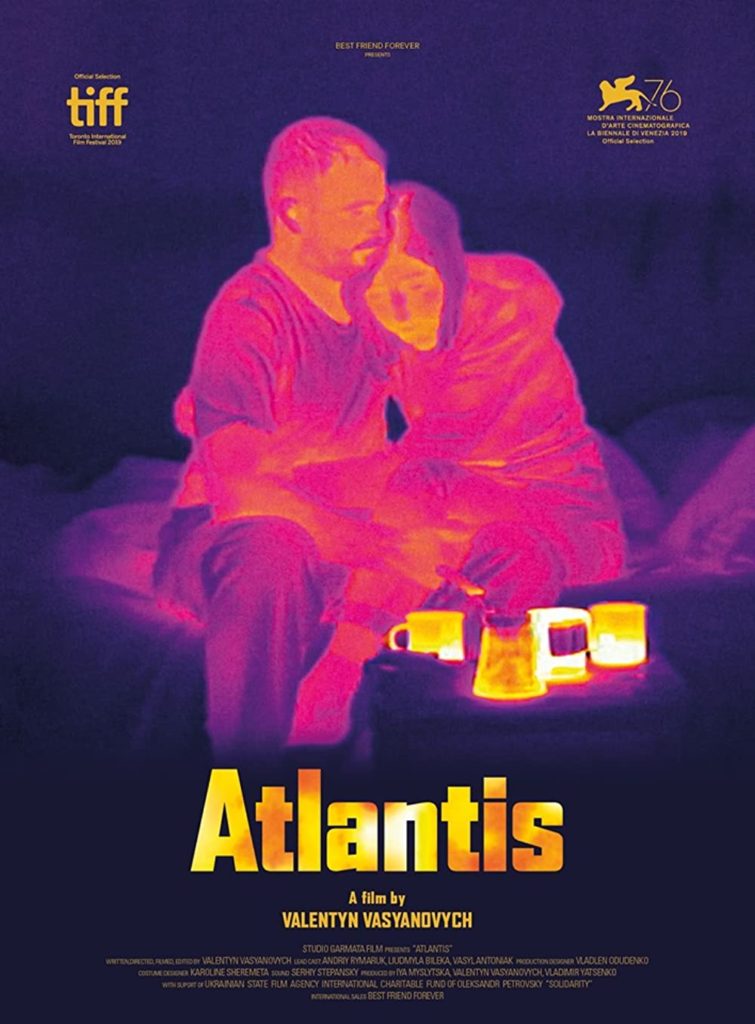