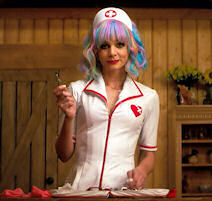 This is a first. I do not recommend the film I voted to receive the Online Film Critics Society (OFCS) Award for Best Film shown in 2020.

“Promising Young Woman,” shot in a remarkably short 23 days, has award-winning acting and a stunning script. The director has produced perfection in each scene. The listed genre? Crime, thriller and drama.

Oxford-educated Emerald Fennell, writer/director, has presented a gripping truth, not in the form of a documentary, but as a drama that locks down like a Pitt bull in the blinding passion of the fight.

The basic story concerns a drunken young co-ed, Nina, who is raped by a fellow male student in front of others at a party. What? She shouldn’t have been so drunk? She put herself in a risky position? The soul desecration was unintended?

Nina was a student in medical school and her perpetrators were her classmates. Was this rape really more her fault than the rapist’s or the guests laughing and egging it all on?

What Fennell does is examine the case. Altruistic young men with grand ambitions of success in the epitome of careers, medicine, are involved in a heinous rape that ends in eventual death for the victim.

The dean of the school reports that several cases like this are reported each year. She politely explains they can’t be proved, i.e. he said-she said, but that women are asking for it when they get drunk. But Cassie (portrayed by British Carey Mulligan with an uncanny American accent), once top of her neurology class, comes up with a startling way to change the mind of the dean … and us, the audience (if we needed it).

Cassie was best friends with Nina, the gal who ended up in trouble. Cassie drops out of school to contrive her revenge scenarios. She plays drunk. Then the seemingly good Samaritans who rescue her and take her home, to their home by the way, to have their way with her, are startled to find a fully recovered, dead-serious, vengeful Cassie on their hands.

Throughout the morality play, the different people involved in the crime against Nina are given an opportunity to repent. At each moment, there is a new twist and the audience cannot turn away.

Fennell’s writing follows a certain arc in Greek drama, with Cassandra of Troy being the one who has special insight on the future. This should not be forgotten as we approach the ending of the film.

But no, despite its monumentally powerful acting, structure, script, and moral observations about cultural norms and humanity in general, this film is not entertainment. It is a brazen, harshly honest story exposing a grand cover-up that has been replicated through history. When you see this kind of truth, close up, it is hard to get over.