“Time” starts when Sibil Fox Richardson, aka Fox Rich, and Robert Richardson fall in love, get married, buy a house, and rob a bank. When hardship came, so did this crazy, inexplicable decision to rob a bank to pay for their expenses. On top of it all, at the time Sibil was young, had a child and was pregnant with twins. She pleads guilty and ends up serving three and a half years. He goes to court and is given 60 years without the benefit of parole.

In 2016, about 16 years into Robert’s sentence, a filmmaker, Garrett Bradley, makes a film called “Alone” about another woman who has a choice about whether to marry a man incarcerated. An older woman featured in the film remarks in a husky, whispery voice, “The system is designed to tear you apart. Instead of using a whip they use Mother Time.” This was Sibil.

After the shooting of “Alone” wrapped, Sibil gave Bradley her supply of about 100 hours of home videos she had saved while waiting for her husband to be freed. It was at that moment that Bradley realized she had a bigger film project to produce.

By 2020, Bradley’s new documentary, “Time,” was released and soon featured as a nomination for Best Documentary on several top tier award lists, including the Online Film Critics Society’s (OFCS) Award.

“Time” shows how Sibil and her mother brought up exceptional sons with high expectations. We also see how Sibil transformed herself into a savvy speaker, just as comfortable in advertisements for cars as she is a motivational speaker at church.

Sibil asks for forgiveness from her family, pastor, and church community. In a world where most children of an imprisoned parent don’t graduate from high school, one of Sibil and Richard’s sons graduates from a college with a degree in political science. Like his mother, he also has the gift of speech and wants to help make the criminal justice system more forgiving.

As Robert does the time, Sibyl hopes that her husband can get a reduction in sentence. Just to hire a lawyer costs $15,000 up front, but she manages.

Before I can say this is a film to motivate change in prison sentences or incarceration conditions, we need more information. First of all, why did Robert get 60 years without parole? Was it his third offense? Did he show no remorse? Did he receive job training or counseling? And what are the factor that lead Sibil to compare a prison sentence to slavery?

Premiering in 2020 at the Sundance Film Festival, “Time” ended up making Bradley the first African-American to win the Directing Award in the U.S. Documentary competition. With access to an uncommon archive of family film clips through at least 20 years, Bradley has woven together a frank film that just begins to open the door on the American prison system and ways it could be improved. 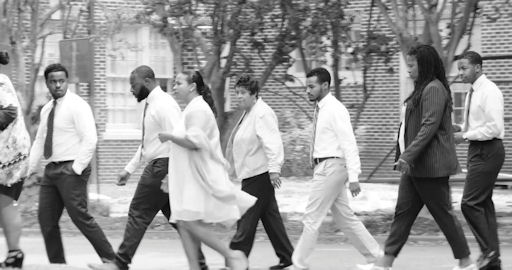