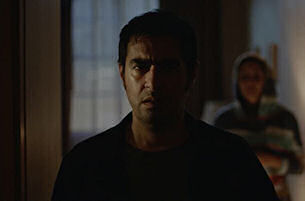 And what a night it was. The Hotel Normandie is said to have seen more death than the WWII beach of the same name. Unlike the Eagles Hotel California one is able to leave any time by the simple act of telling the truth. Death is not a possibility, as much as the guest may wish it. As the noble informed the young ambitious knight who proclaimed he would give his life for his country, “Yes, but would you give your honor?”

The guests of the Normandie, Babak (Shabab Hossein) and his wife Neda (Niousha Jafarian) will be asked to do that before the night is out. In fact, the night never ends unless they tell the truth about their past crimes. As it turns out, some of their crimes are minor by present day standards. Others are monstrous. The most powerful part of writer/director Kourosh Ahari’s screenplay (co-written with Milad Jarmooz) is that the most egregious acts for which they are imprisoned are never revealed. Specters haunt the halls and beg the audience to imagine the worst.

Who better to fill in one’s own nightmares than the viewer?

The executive producers of “The Texas Chainsaw Massacre” get downright Bergman in this flick. Although there are only three actors supporting the two leads (four, including the baby), they are downright doozies. Elester Latham plays the Displaced Man and morgue orderly, the prophet and collector of the dead. In a first rate package of acting he is both a narrator and executor, telling it like it is, unlike the hotel receptionist George Maguire.

Maguire is the devil himself. He has seen more carnage than Lucifer in the Stones “Sympathy for the Devil.” As he informs the new guests the hotel is full, so they must take a suite, he rattles off the mass murders and other mayhem he has witnessed. Later the hotel turns out to be empty, with Babak, Neda and their baby the only guests. Last, but far from least, is Michael Graham, the last policeman you ever want to meet.

Although the Hotel Normandie is being compared to “The Shining’s” Overlook Hotel the screenplay is actually more delightfully horrible than that. Jack Nicholson goes crazy as his son establishes a “shining” connection with the hotel but is never called outright to humiliate himself to regain his normal life. Sartre’s “No Exit” might be a better parallel. The guests will be required to spend an eternity with their tormentors until they relive their guilt.

Although it has a few rough edges, details that do not seem to add to the story, the basic story is solid and the performances are heartfelt. If Hossein is no Jack Nicholson, he is headed in the right direction (for better or for worse). He won Best Actor at Cannes in 2016 and Berlin in 2011. The soundtrack is perfectly creepy without the time-worn never-ending percussion and only a few obnoxious jumpscare blasts.

This directorial debut from Iranian filmmaker Ahari is the first US-produced film to receive distribution in Iran in four decades. This, alone, is a nod to the past sins of Iran’s Anglo-Saxon brothers in the Western hemisphere. Who is being locked in and who is being locked out?