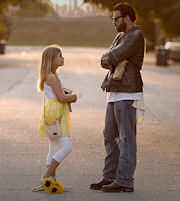 “Tulsa” is a unique movie, start to finish. Not only is “Tulsa” heartwarming, but we become truly invested in the journey of its two main characters as much as the characters themselves.

Scott Pryor may be an attorney in real life, but in “Tulsa” he serves as its male star, co-writer, co-director and executive producer. As a writer, he clearly put a lot of heart and soul into the script. As a director, he did a marvelous job with a variety of different scenes that ranged from day to night, snarky to heavily emotional and a fairly large cast of characters. As executive producer, he surely wore a million hats and perhaps even more, since this was largely his project.

As the character Tommy, Pryor owned the role and brought a depth to his character’s shallowness that eventually evolves to another place entirely. In “Tulsa,” Tommy is unexpectedly thrust into the role as an immediate caregiver to Tulsa, a precocious, yet wise 9-year-old daughter he never knew he had until one day she came into his life.

Although Tommy really wants nothing much to do with Tulsa and is very set in his ways, Tulsa persists in making him a more thoughtful, caring and introspective person. The wordplay between Tommy and Tulsa also provides for some light comic moments.

As the character of Tulsa, young actress Livi Burch simply owns this movie. The angelic actress lights up the screen in every scene she appears and masters an incredible amount of dialogue with an equal amount of a range of emotion. It is no surprise that Burch has been working in film almost nonstop since “Tulsa” and she is an actress to watch – much in the vein of Dakota Fanning.

The film has definite Christian overtones which are woven through the fabric of “Tulsa.” Those Christian angles also play into the development of Tommy as a character. The movie was inspired by actual events which makes the film even that much more real and touching.

Without giving too much away, Tulsa winds up in a hospital where her physician Dr. Holden is portrayed by veteran actor John Schneider, who delivers a solid performance. Scenes with Schneider and Pryor together provided some very beautiful acting moments and Pryor certainly holds his own with Schneider.

The one head-scratching moment during “Tulsa” surrounds John Schneider as Dr. Holden. Why does he look like he just stepped off an airline flight and onto the movie set in street clothes? Surely a doctor in a hospital would look differently than this. But It’s John Schneider, he gets a pass.

“Tulsa” is a film that appeals to any member of the family and certainly to a wider audience than those who strictly enjoy Christian films. The final 15 minutes of the movie is like a poignant, yet beautiful bow wrapped around a thoughtful Christmas gift. And that is exactly what “Tulsa” is – a gift to the viewer. It is no wonder that “Tulsa” took home the award for Audience Choice Best Picture at the 2020 International Christian Film Festival.