There are three things to know before you see this film. First, Jon Stewart, past host of “The Daily Show,” is the executive producer, so expect a documentary with integrity. Second, one man, Charles Lee, knows the fundamental problem in refugee camps, so expect a solution. Third, all factions fighting in the Syrian Civil War are financially supported by other countries and interest groups, so expect this crisis to continue. 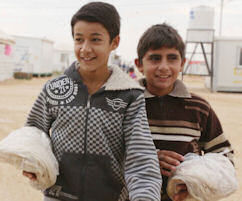 The Syrian manifestation of the Arab Spring was a call for citizen rights and democratic rule. It began with peaceful protests for democracy and human rights from President Bashar al-Assad’s government in January 2011. An opposing group formed the Free Syrian Army (FSA) and then other opposition groups formed. Since March 2011, half of Syria’s population has been killed or fled.

“After Spring” focuses on the big “Now What?”

Approximately three million Syrian refugees are now in camps in Turkey, over a million in tiny Lebanon, where 450,000 Palestinian refugees still reside, and about a million dwell in the desert camps of Jordan. But in these deserted areas outside cities there are no work permits and no integration into host cultures.

The filmmakers follow a father of seven, Ibrahim Rashid, who has been in the Free Syrian Army and a government prison. His family was among the first to arrive at the Zaatari camp in Jordan when the accommodations in UNHRC (UN Human Rights Council) camps were tents without water. However, now many box houses are provided and water is available. The new dwellings look like half-size railway container cars and many refugees have taken to decorating them.

Zaatari has about 800,000 refugees and within two years, though no one can work outside the camp, little businesses have cropped up amidst the shelters creating a city-like atmosphere. Ibrahim was one of the first refugees with a family to arrive. With each interview he changes his mind about what to do — move back to chaotic Syria and risk the lives of his children or stay in Zaatari with little hope of ever returning to his job, family home and garden?

Rashid misses his land, job, routine, freedom and purpose. He feels like he is just standing in place, marking time. His oldest son refuses to go to school, remarking that the teachers do not care and take little time to teach. He has lost his authority.

Into this vacuum, late in the film, comes an extraordinary character, Charles Lee, from, of all places, South Korea. Not knowing Arabic, Lee has been living in Amman, Jordan, for about 14 years with his wife as an acupuncturist. However, when he visits Zaatari he sees there is something else he can offer which he believes will change the hearts, minds and defeated personality of the camp: Taekwondo.

Lee, familiar with the trauma civil war can wreck on a country from his own history in Korea, convinces the UNHRC official in charge, Kilian Kleinschmidt, that the people need structure and dignity. With nothing to do and nowhere to go, the refugees had become restless and susceptible. Lee convinces Kleinschmidt that the self-discipline, manners and practice of Twaekwondo could bring hope, a more positive attitude and order to the Zaatari community.

Despite tackling an important world subject and convincing Jon Stewart to support their project, a driving storyline with a more intimate exposure to a Syrian family would have helped anchor audience attention through this 101 minute film.

The greatest moments involved Kilian Kleinschmidt, the UNHRC head of camp, and Lee’s pitch to help the refugees. However, opportunities to prove that taekwondo positively affected the camp was missing. Also, though both girls and boys were being taught and we saw their beaming faces, did student attendance at school and respect to their parents improve? Could basic education classes, art classes, dance classes and other sports teams also be promoted in the camp? What about education, work and sanitation at the camp?

While the film is not condensed enough and lacks an emotional trigger, it still represents an understandable summary of the Syrian refugee situation and the challenges the UN and the world have in supporting these people who have literally run away from all they have ever known. 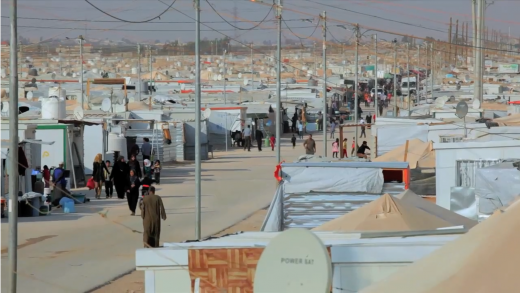