Based on a true Romeo and Juliet story, this tale of dangerous, forbidden love takes place on Tanna, one of the lush Vanuatu jungle islands in the South Pacific. Tradition rules that girls must marry outside their tribe, but Wawa and Dain, members of the same tribe, secretly fall in love. 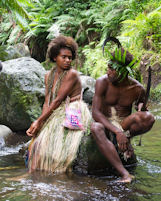 When mayhem occurs from attacks from a neighboring tribe, Dain’s mother is speared to death and his father, the tribe’s shaman, is so severely attacked that he appears brain damaged. To bring peace between the warring tribes, Dain’s grandfather, who does not know of his grandson’s affection for Wawa, promises her to the opposing Imedin chief who announces he will give her to his son. As the grandfather makes the pact, he does not know that the chief’s son is the one who bashed in the shaman’s head.

However, Wawa’s younger, sprightly sister, Selin, knows who did it. Her energy and sensitivity, at one point crying to heartbreak, show a stunning emotional access and a sweet heart.

The elders explain to Dain and Wawa that the chance for peace on the island is now up to them. The lovers must obey the edict to ensure the potential survival of their tribe. However, when the tribe learns that Dain and Wawa immediately compromised the chief’s edict by sleeping with each other the night before the exchange is to happen, Dain is expelled from the tribe, picks poisonous mushrooms and heads for the volcano.

The entire cast is comprised of the remote local tribespeople of Yakel. Not only are they illiterate with no acting experience, they had never seen a movie. They hunt with bows and arrows, the females wear only grass skirts and the men only wear penis sheaves. But they reported that they found the acting easy because they played who they were. The chief was really the chief, Dain was the most handsome in the tribe and everyone else played exactly who they were.

The production staff for this beautifully filmed story, based on events happening about 20 years ago, stayed with the Yakel for seven months. While Bentley Dean, the cinematographer/director/screenplay/producer, captured magical visions, his two young children integrated into the tribe. Martin Butler, director/screenplay/producer and past correspondent for “Dateline,” an award-winning international current affairs TV show, also wanted to embed himself into the culture and learn about this tribe’s belief in the volcanic Spirit Mother, Yahul. The result is a beautiful tribute to the life and growth of the Yakel tribe.