Like still waters that run deep, “Aftermath” is an atmospheric triumph that will be too slow for most American audiences. Not that this is not a great film. It is a great film, but it is too studied and framed and there is not enough plot progression to keep the audience engaged. The screenplay is the story of two brothers, Jozek (Maciej Stuhr) and Franek (Ireneusz Czop). Franek returns home to Poland after many years of living in America to find his formerly quiet, peaceful and friendly town full of unspoken hatred and misgivings directed at him and his brother.

Jozek has taken to the most curious behavior. He is digging up roads and making messes in various public places for reasons half of the townsfolk do not understand and the other half want to pretend they do not understand. Back on the family farm, he has created a field of skulls for some unknown reason, and it is not installation art. Something is definitely bothering the man and the fact that certain roads and courtyards of the village, occupied by the Nazis during WWII, are paved with human bones may have something to do with the answer.

“Aftermath” is slow, but it probes into the subtle details of the holocaust, details that were not addressed in the “first wave” of Nazi condemnation films such as “Diary of Anne Frank” through to “Schindler’s List” and all. The first movies dealt only with the superficial truths, situations that were easy to grasp and to judge. As time goes on, more films like “Aftermath” emerge. These films explore how much responsibility we, supposedly the non-combatants, share with the Nazis in causing the atrocities of Jewish enslavement and murder.

As it turns out, it took many players to carry out one of the most horrific war crimes in history. The Nazis never could have done it all by themselves. Americans helped, the British helped, and, yes, the Polish helped. The Polish probably should be blamed less than the Americans and the British, since the SS was staring down at the unarmed peasants over the barrel of a cocked Luger as the peasants did what they were told. 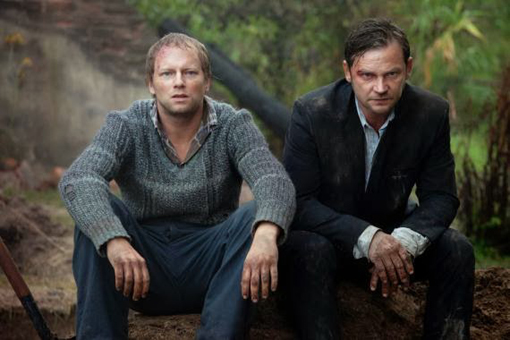 The film is about the brothers slowly (very slowly) discovering a secret that forces them to revise their perception of not only their entire town and generations-old neighbors, but about their very heritage itself. Can they live with the secrets of the holocaust? Should they have to? What is the debt of relief that a citizen owes his neighbors, the debt of taking on the burden of their sins?

Weighty questions, indeed. In the end, the brothers take on that weight and must live with the consequences. For even those who are saved are not necessarily grateful for their salvation. Even a secret that hurts forever might be preferable to the overwhelming pain of admitting to the treacherous killing of unarmed men, women and children under the guise of declared war.

America is all too willing to live and let live, nearly three-quarters of a century after the Holocaust. However, after this film was released in its native Poland, it received intense criticism from Polish nationals, who accused the film of being “anti-Polish propaganda.” The movie has so angered the Polish right wing that it has been banned from some local cinemas, while leading actor Stuhr has received death threats.

Director Wladyslaw Pasikowski defines and claims this dark chapter in Polish history as one of the few remaining stories never to have been shown on film. “Aftermath” tells that story through the lives of ordinary people who prefer to keep politics at arm’s length, even while their substantial decency and uprightness shields their baseness and lies.

This film would be much more interesting to watch in a theatre in Poland, than it was in a theater in the USA. Although, when viewed in America, audiences would do well to understand that some of our streets, too, are paved with the bones of the dead.